Spoiler alert: it did! 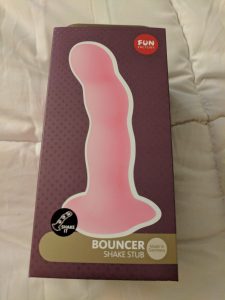 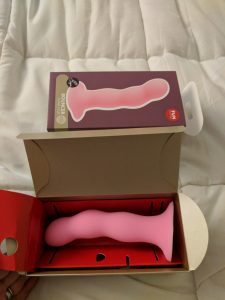 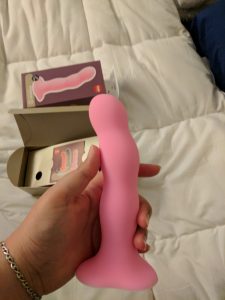 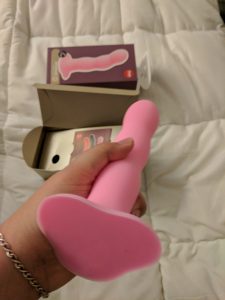 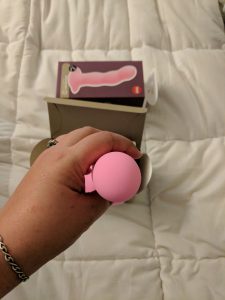 When I took the Bouncer out and started shaking it around, I was immediately reminded of the Fun Factory Smartballs that I have and love. Like the Smartballs, the Bouncer has weighted balls inside, one in each bump, and they move and jiggle around when you move and jiggle the toy around. It feels like a giant shake-weight in hand.

In my vagina, though, it’s nothing short of wonderful. The toy is large enough that it gives me a bit of stretch going in, but it’s not so large that thrusting is difficult. This is important, because the Bouncer is a toy that becomes magical due to thrusting.

The movement of the balls translates to something akin to vibration. It’s not vibration, exactly, because it’s not as fast, but it’s similar. The sensation transmits throughout my vagina, and because of the location of the balls, it hits all my internal sensitive spots. For only a little movement, I get the sensations of a lot more movement, and a lot of movement escalates to wow.

There is only one complaint I have for this toy, and it’s a quibble more than a real complaint. The toy advertises that the “low profile base enables it to stick to smooth surfaces and walls.” This, in my experience has not been the case. I have tried to stick it to:

Each of these edges would count as a “smooth surface” or “wall,” and the Bouncer did not stick long to any of them. I mean, it would stick to the vertical surfaces for a minute or so, but any kind of pressure – like from trying to fuck it in this position – and the damn thing fell off immediately.

It’s not fun to stick it to a surface unless you’re also going to fuck or suck it! Otherwise, it’s just something to terrify my husband.

Come to think of it, that’s not a bad use. But it’s not the intended use!

Also, when sticking it to horizontal flat surfaces – the nightstand, the vanity – it lifted off immediately and refused to develop good suction of any kind. I would be unable to straddle and mount this toy without it moving all over the place.

As for me, I’m in love, and I’ll be coming back to the Bouncer – and coming on the Bouncer – for a long time. Nice job, Fun Factory.

Fun Factory provided the Bouncer in exchange for this honest review. Affiliate links are being used throughout this post.