Tantus sends all their toys in neutral packaging, but once you get through that packaging, the actual toy boxes are bright and colorful. They also make it easy to see what’s inside. Way to go, Tantus. I always appreciate knowing what dick is coming.

The Echo Super Soft has what appears at first to be a corkscrew pattern and is of average girth. It also has a flared base, like other Tantus toys, so it would work in a harness. 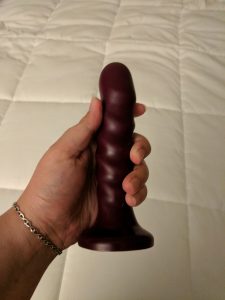 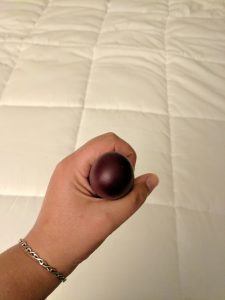 The Tantus Echo Super Soft is, as the name would imply, super soft. Unlike many vibes which have a stronger, solid core, the Echo is very flexible. 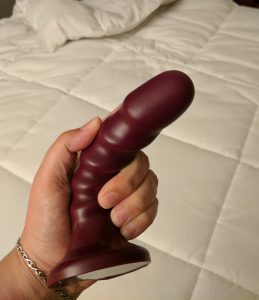 Notice how much I can bend this! It’s not super wibbly-wobbly; it’s got enough of a structure to hold itself together. But it’s flexible.

The first thing I noticed when playing with the Echo was that it doesn’t respond well to being forced. Because it’s so flexible, I can’t just hold it by the base and shove it in. The Echo preferred to bend rather than penetrate. With a little gentle persuasion, though, it was a steady and easy insert.

The shape of the Echo is great for stimulation. The head is slightly flared, with a small ridge, and the body itself repeats that ridge over and over again in what somewhat resembles a corkscrew. In general, I might find texture like that a bit rough unless I’m very aroused, but again, the Echo’s softness eases the process. It’s not an uncomfortable toy for me by any means. The texture was just right, enough stimulation without being too much. It rubbed my g-spot nicely. I think if this toy were not textured, it would be forgettable, since it’s not quite wide enough to be significant. Since it’s textured, though, it gets a little extra oomph.

The length of the Echo was really nice. I felt like I could achieve full penetration without having a bunch of toy left hanging outside my vagina. Obviously, every body is different and your mileage may vary, but I found it long enough without being too long.

Don’t shove at your sex toys, people. Or your partners, for that matter.

Unless you’re into that.

This toy would also work well in a harness, although again, the softness means you have to guide it into your partner. If you’re using a harness/dildo instead of a penis, you don’t have your own physical sensations to guide you, so you have to manually control the shaft quite a bit. It’s ok. This is a good toy for playing around.

If you’re more of a size queen/king/non-binary ruler, you might want to try the Tantus Goliath. I’m going to ask to try this toy next, so hopefully you’ll see my thoughts about it in an upcoming review.

Tantus provided an Echo Super Soft in exchange for this review. Affiliate links are being used in this post.