Here is my Fun Factory Bi Stronic Fusion Review! At the bottom of this post is information about how you can win your own courtesy of Fun Factory and this blog.

After I reviewed the Fun Factory Stronic Eins, I knew I wanted to try another one of their pulsators. Based on my wants for the Eins, namely that I could get more clit stimulation, I decided to go for the Bi Stronic Fusion. This toy breaks the trend of German counting that Fun Factory had established with the Eins, Zwei, and Drei, but “Bi Stronic Fusion” sounds space age and so I’m cool with it. 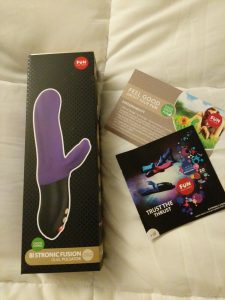 The Fusion, like other Fun Factory toys, is packaged in a lovely box that makes you feel like you’ve just received something special. I commented on it in my review the Eins, and it’s just as nice the second time with the Fusion.

I appreciate good packaging. My favorite part of shopping at the liquor store is examining all the beautiful bottles of alcohol. Like gorgeous glass bottles and handsome men in suits, pleasing packaging makes me want to stop and admire… and then rip into it.

The texture of the Fun Factory pulsators is nice. It’s silicone, but it’s not a sticky silicone. It’s firm and yet a bit soft. It feels good to hold. The base is solid, the buttons well-raised and easy to find. The Fun Factory on/off button on the base is oriented to be readable when looking down your body while using the toy, which is a nice detail. The buttons also light up when the toy is in use, so that’s helpful.

I was prepared for my sixteen hours of charging time, because that’s what these pulsators require. This was the toy that got me to put a power strip next to my bed. You win, Fun Factory. I finally have enough toys that I need more outlets to handle them. The Fusion has the same “click and lock” charging system common to all Fun Factory toys, making charging easy and cool, too, even if it does take forever. 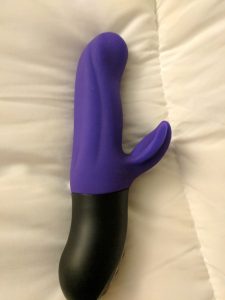 It took me a bit to get the Fusion inserted. I don’t have problems with lubrication, but the toy is a bit girthier than the Eins, enough to be noticeable. I inserted it all the way, tilting the clit cobra back to lie flush over my clit, its cobra hood against either side. Then I turned on the toy.

Because I did not read the manual, I used the buttons in the same function as the Eins, meaning I assumed (a stupid thing to do; more on this later) that after turning the toy on, each button unlocked a different set of options. Like, if I hit the top button, then I could cycle through Set A of vibration/pulsation patterns. If I turned the toy off and back on again, then hit the bottom button, I could unlock Set B and also cycle through those. Does that make sense? Well, it was not happening exactly like that with this toy. I couldn’t exactly figure out what was happening down in my bits. Sometimes it was vibrating more and pulsating less, sometimes the vibration would stop, sometimes the pulsation was in a pattern… SO MANY CHOICES!

(Spoiler alert: I was being stupid.)

I finally found a pattern that seemed good. The pulsator was thrusting, and the clit cobra was vibrating nicely, and I could just chill out and let the toy do all the work. It was lovely, and when I came, I came without any extra stimulation. Bam! Success.

In Test Run 2, I realized that I can be very dumb. I came back to this toy a few days later. There had to be some kind of key to this whole pulsation/vibration pattern thing. I had the lights off in the room already, though, and I didn’t want to get out of bed and turn them on and then find the manual, so I tried to find one online. I was unsuccessful finding the manual on the mobile site, so, exasperated, I just pulled the toy out and looked at it.

It turns out, that’s exactly what the toy does. While I was randomly hitting buttons trying to get a combination I liked on that first test run, I was just being a colossal dumbass. Armed with this new knowledge, I set it on a low vibration and a faster thrust. I started out like I had before, with the toy all the way inserted and the clit cobra pressed snugly along my clit. This was working fine, but I felt like I was missing something.

I remembered how nice the g-spot stimulation was with the Eins, so I pulled the toy out a bit and angled it more. At this angle, only the tip of the cobra was resting against my clit, and the vibrations were magnified. The toy could also thrust a lot more aggressively like this. JACKPOT. In this position, I came hard in only a short amount of time.

I liked the Eins a lot, but the Fusion surpasses it in ease of orgasm for me. I can come with just the Eins if all the circumstances align in a perfect storm, but I’m much more likely to need another hand on my clit. The Fusion, though, does both for me, and does so elegantly. It’s a hands-free toy in the best sense.

Like the Eins, the Fusion is waterproof. I think I’ll take this one into the bath soon and see how it performs.

The awesome people at Fun Factory sent me two of these toys! This means I have one new-in-box Bi Stronic Fusion to give away to a lucky reader. The contest is open until January 28, 2017, and you must be a U.S. resident at least 18 years old to enter. Use the Rafflecopter below to enter, and good luck!