Skip to content
Posted on May 2, 2017Author Elia Winters No Comments on Fun Factory Delight Review: If Only It Was a Delight

Some gif advice for #MasturbationMonth : this is not how to deal with a clitoris. pic.twitter.com/YOWHHx7M56

My first sex toy review of the month is my Fun Factory Delight review, and folks, I wish I had a better start to the month. While I love Fun Factory and their toys, this toy just did not do it for me. But let’s start at the beginning.

Origins, or Why I Wanted It

Fun Factory makes some really cool toys that have functions unlike other toys. I’ve reviewed the Stronic Eins and the Bi Stronic Fusion, two pulsators that thrust and therefore feel different than anything else I’ve seen on the market so far. I also reviewed the Laya II, which, although it doesn’t work for me for intercourse, works well as a targeted solo-sex toy. I wanted to try something else that fell in the category of “different from other toys,” so I asked for the Delight, an s-shaped vibrator that looked like it might stimulate my g-spot and my clit both at once.

With the first Delight that arrived, however, I couldn’t keep the magnetic charger connected. One of the conductors kept slipping off, like it was magnetically repelled instead of attracted. A closer look showed that the connection point in the toy’s body was angled, screwing up the magnetic field. I sent pictures to Fun Factory, and they wrote back immediately, telling me I could go ahead and recycle the Delight and they’d send another that day. And they did!

I don’t mind when products sometimes have defects. This is the first defective product I’ve ever received from Fun Factory. Their customer service was fast and friendly, and it was easy to get the toy exchanged.

The Delight came in beautiful packaging, like all Fun Factory toys, a pleasure to unwrap. (Shall I say… a DELIGHT? *laughs at own joke*) 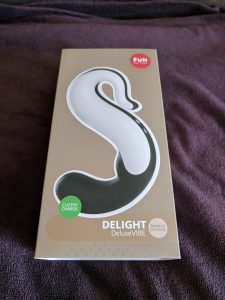 The toy itself had a good hand-feel. It was pleasant to hold, and the little loop at the end was nice to grip. 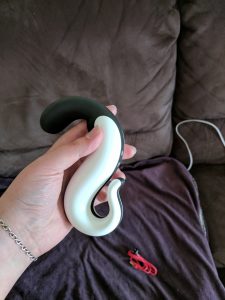 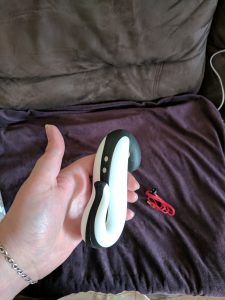 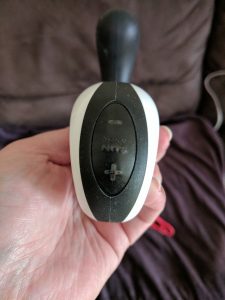 I was intrigued by the sharp angle of the insertable portion. Yup, it seemed like it would reach my g-spot fine. Plus, it was flexible. 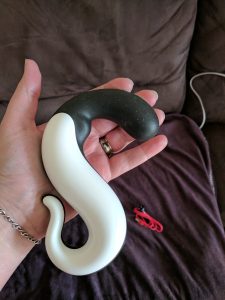 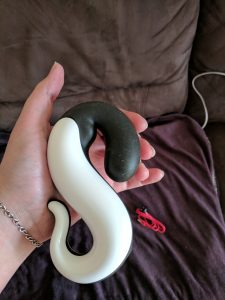 Once the new one was charged – no charging problems this time – I set about using it.

I honestly kept thinking I was using this toy wrong.

It took me a few tries to actually get the angle of the Delight set up correctly for insertion. The S-shape of the body means that to get the insertable tip at all positioned right, I have to start at a fairly strange angle. Well, okay, maybe that’s just how it goes. Once it started to go in, though, the rest of the insertable part slid in fine, so I thought, maybe I’m not wrong, here.

With the toy in place, I switched it on. This took a couple of tries, because while the buttons were easy to find in hand, they were a bit trickier in use. The buttons didn’t feel that different from the actual handle of the toy. But okay, fine, I found them, and I turned it on. Here we go.

Sadly, this was not a romance meant to be.

Why the Delight Wasn’t a Delight

I had a few issues with the Delight. First, the vibrations. The vibrations were buzzy, not thrummy, and just not the kind of vibration that gets me off successfully. In a toy where vibration is its main sell, that’s a bummer.

The next problem was in moving the Delight. It’s not easy to thrust. The curve of the insertable dildo-arm was so drastic that while it was hitting my g-spot, I couldn’t pull it out without majorly angling on the body of the toy. It pressed against the g-spot on its own, sure, but I like my g-spot stimulation with some movement, and the vibration wasn’t enough movement to replace a good thrust, or even a rocking motion, both of which were inhibited by the toy’s shape.

My next problem was also related to the shape. Although the S-design is ostensibly supposed to hit the g-spot and the clit simultaneously, it doesn’t successfully press them both at the same time for me. This might have something to do with my own anatomy – after all, everyone’s different. Technically, part of the body of the toy was against my clitoris, but not solidly: only part of the curve was anywhere nearby. I couldn’t get pinpoint stimulation. Also, there was no texture to that part of the Delight, so I had trouble distinctly feeling it in my clit. When I tried to move the Delight back and forth, the toy slid near and over my clit, but without texture, the vibrations felt diffuse and not effective, even on a higher setting.

Ironically, while the toy failed to provide stimulation on my clit, it also blocked access to my clit. I couldn’t fit my fingers in between the toy and my body to be able to adequately rub there. This meant that I quickly got frustrated in my attempts to get off. The only way I could get clitoral stimulation was to thrust as much as I could, a half-inch or so, essentially banging the body of the Delight into my clit. While I did eventually orgasm, it was more despite the Delight rather than because of it.

The Delight looks cool. It just doesn’t work well for me.

It might work well for other people. If your g-spot is assuaged by pressure and vibration without thrusting, or if you don’t need a lot of clitoral stimulation, the Delight might be right for you. If it aligns with your particular anatomy, it would probably be amazing.

I wanted this toy to work. It looked really neat, I liked holding it, and its potential intrigued me. Sadly, it just wasn’t for me.

If you want to find out if it’s a good fit for you, the Delight is sold by Fun Factory.

I received a Delight from Fun Factory in exchange for this honest review. Affiliate links are used in this post.