The Crescendo packaging is some of the best I’ve seen. It comes in a beautiful black box, and the whole thing just screams elegance. Can you even scream “elegance,” or is that an oxymoron? Regardless, it’s a sexy box.

Inside, you have the actual toy, along with the charging pad and a black cushioned case for storage.

The case is beautiful. It has ribbons to tie it closed, and it’s just overall a class act. It looks like you have just paid several hundred dollars for a sex toy, and frankly, you have.

The Crescendo itself comes in either purple or teal. It’s moderately long, somewhat thin, and tapered at one end. 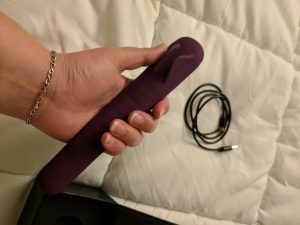 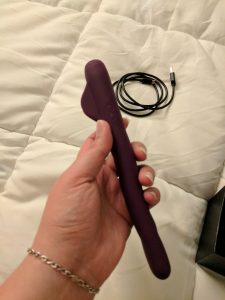 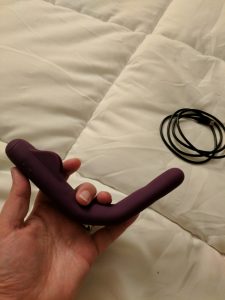 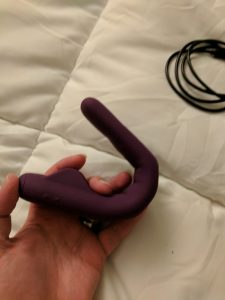 To charge the Crescendo, you don’t have to plug it into anything. It has a charging dock. You set the wider end of the Crescendo on the round pad, and plug the pad in, and the pad blinks green to let you know that it’s charging successfully.

There’s a bit of finagling to make sure it’s all lined up right. You can’t just set it and forget it like the Ronco rotisserie chicken cooker. But you don’t have to spear it with a charger to charge it, so that’s a really good thing.

The App and the Vibe

The clit end of the Crescendo has two flexible fins on it, which I suppose are intended to stimulate the sides of the clitoris. 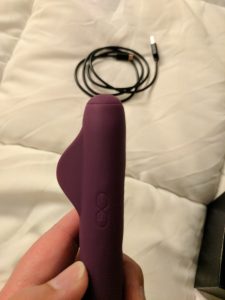 For me, they basically mean that the toy doesn’t press hard against the main head of my clit. It almost does. But if I want firm stimulation on my clit, I have to hold the Crescendo against my body. I want to use the toy as hands-free, and I can do that, but I have to keep my legs together. Insert whatever joke you want to use here about how hard it is for me to keep my legs together. Go ahead. I’ll wait.

You good? All right, continuing.

The variable vibrations are really nice. I love having six vibrators! I really can feel the distinct sections. Maybe not all six, but I can tell between at least three or four different areas of stimulation, and I like playing with the programs and finding one that stimulates me exactly as I want it. I can get off successfully with this toy.

My quibbles with the Crescendo are generally minor.

First, regarding design. Because of the nature of the Crescendo, it’s pretty thin in one axis. It’s aiming for width in the other, but it has to be mostly flat so you can bend it into different shapes. What this means, though, is that I can’t feel much of the inserted part. The most sensitive part of the interior vagina is the front wall where the g-spot is. That part responds to pressure, and the toy itself isn’t wide enough to give it steady pressure. Fortunately, the toy is bendable, and I can bend the very tip so it presses into my g-spot. It’s not the same as having a toy with girth inside me, but I understand why the Crescendo has to be the way it is.

Finally, regarding functionality. The buttons on the side of the toy are hard to use. When I first turned the toy on, I accidentally locked it by holding two of the buttons at the same time, and it took me a while to figure out what I did wrong and why I couldn’t turn it off again. I don’t understand why it’s so difficult to just put a power button on these toys, rather than rely on pushing other buttons. I’m going to lose that little instruction card that tells me how to lock and unlock it. Please, make it easy for me. I’m not always thinking with all brain cells when I go to use a sex toy.

The value of the Crescendo is also in its perceived value. It’s a beautiful toy with gorgeous packaging. It will make a great gift. Because it’s poseable and customizable, you can give it to a sexual partner and be assured that it will likely be a good choice for them.

I’m looking forward to seeing what’s next for Crescendo and Mystery Vibe.

The Crescendo was provided by Luvoqa in exchange for this honest review. You can get your own Crescendo through Luvoqa or other fine retailers. This post uses affiliate links.