The Whale comes in a small, simple peach box with a cute whale on it. At first glance, it definitely looks more like a box for a kids’ bath toy than a sex toy. 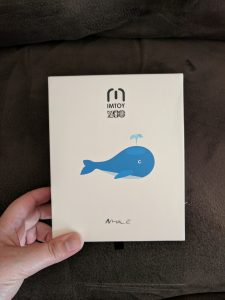 Inside, there’s an instruction manual in a ton of different languages, which doesn’t really give a lot of information except the basics, and then there’s the actual toy. 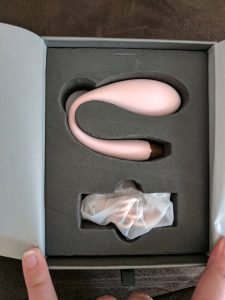 The whale is cute! It’s silicone, peach-pink colored, and has a rose gold tip for magnetic charging. The cord matches it in color scheme. 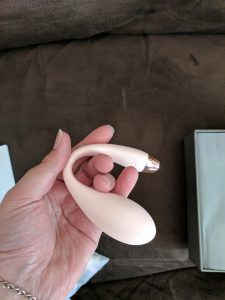 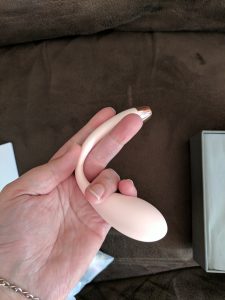 As you can see, the external end has some good flexibility in it. It’s got decent heft as well: while it’s not very heavy, it’s solid, and it’s got a good textured feel.

The app, though, is not very intuitive to use. There are a bunch of vibration patterns, but it’s hard to tell what each one is going to do from the looks of it, except the one that ramps up and down. The others are hard to anticipate and also hard to distinguish one from the other. Sometimes I couldn’t quite figure out whether the app stopped working or whether the two settings were so similar as to be indistinguishable. As a result, a bunch of them felt redundant.

You can also set it to vibrate more strongly when you shake your phone. Let’s be real, though: that can’t be good for the phone, right? It’s a cute idea, but not very practical. I’m not going to sit here shaking the hell out of my phone trying to reach orgasm.

I’m not sure that’s the best title for this section. It’s a little fucked up, come to think of it. So am I, so I’m keeping it.

After playing with the app a bit, I started to use the toy legitimately. The wider silicone bulb was hefty enough to be noticed, which I appreciate, and it pressed nicely against my internal walls and a bit against my g-spot. The external part of the whale is designed to fit against the clit, and it… pretty much did. I say pretty much because it doesn’t quite align anatomically with me, and so I wasn’t getting exact perfect contact.

Once i had the whale working, the strength of the vibrations were generally pleasing. They were buzzy, though, rather than thuddy. As a result, they didn’t bring me to orgasm as quickly or reliably as other, thuddier vibes. The buzzy vibrations didn’t travel down to the clitoris as reliably, either. I was getting secondhand vibrations transmitted through the narrow part of the toy, as it was designed, but with the slightly off clitoral alignment and the buzziness, it wasn’t exactly a match made in heaven.

The whale had some redeeming qualities, though! The width of its internal bulb meant I felt the vibrations all throughout my vagina, and they were strong enough that even with the not-exactly-ideal clitoral placement, I still got stimulation. Also, once I got sick of screwing around with the different-but-not-different vibration patterns, I was able to focus my way into orgasm. It wasn’t an unavoidable, transcendent, powerful build to climax, but I got off nonetheless.

One of the purported features of the Whale is the ability to wear it discreetly in public. This is not a feature I’ve personally tested. I love the idea of remote control vibrators, and I did a whole podcast episode about them, but I’m hesitant to use them in public, and here are a few reasons:

The app is mediocre. I would rather be able to create my own vibration patterns and save them rather than have a dozen patterns, half of which seem identical to other patterns. The other features, like talking into it, interfacing with music or video, and shaking, seem novel but not especially practical.

It also seems odd that the app can’t connect with a partner. Isn’t part of the joy of Bluetooth technology the ability to connect sex toys across the globe? The Zoo app is designed for one person only, and so if you want a friend involved, they need to be with you in person.

The Whale was provided by IMToy in exchange for this honest review. No affiliate links are used in this post.