This Fun Factory Stronic G review will strike some familiar chords if you have read my other Fun Factory pulsator reviews. The Stronic G further elevates and refines several of the pulsator’s best qualities, while also minimizing some of the aspects I didn’t like as much. There are a few downsides, but overall, this might be my favorite pulsator so far. Or at least, it’s one I’m going to recommend.

For the third day of Dicksmas, here is a delightful device that does the dicking dreamily. Or at least sufficiently.

The pulsators really appealed to me for doing what other toys on the market can’t really do: thrust. There’s something delightfully pleasant about that motion, and I was an immediate fan. When I heard that they were releasing a new type of pulsator, of course I was intrigued. Who wouldn’t be? I jumped at the chance to try the Stronic G, and a short while later, it arrived in the mail.

Fun Factory packages their pulsators in long, slim boxes with a single sleeve.

When you open the box, the toy is there with its little net protective pocket, which always reminds me of how they protect certain delicate fruit at the grocery store. 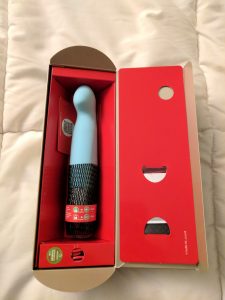 The Stronic G is lighter and slimmer than the other pulsators, which I noticed immediately upon taking it out of its packaging. Here are a bunch of photos so you can see it from different angles, including its width and the curve of the head.

Like other Fun Factory pulsators (and vibrators), the Stronic G charges through a magnetic charging system that they call “click-n-charge.” The charger attaches to two magnetic contact points at the bottom of the handle. 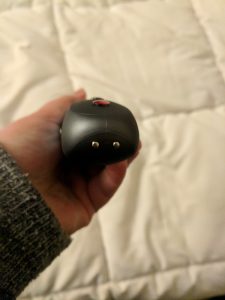 The pulsator, like all the Fun Factory pulsators, has three buttons at the bottom. One is power (like, on and off, not like the power of the universe). With the Stronic G, the other two unlock a series of different pulsator options. It starts on medium, and then you use the up and down buttons to change its intensity and pattern. 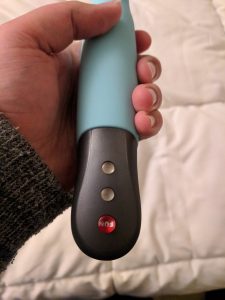 The Stronic G fixed a complaint that I didn’t even realize I had with the other Fun Factory pulsators. I really liked those, but they are not thin toys. Before I could use them, I had to get warmed up, and also use lube to insert them. Despite my body’s abundant natural lube, silicone has a drag to it. If you’ve ever used a silicone insertable toy, you’ve probably noticed this: silicone tends to “catch” on skin in a way that’s different from glass or steel. With the other Fun Factory pulsators, if I wasn’t sufficiently wet, the toys tended to tug at my vagina during the thrusting. That isn’t fun.

The Stronic G, with its slimmer design, thrusts without dragging my vagina along for the ride. This is wonderful. The head of the toy is prominent, as you can see from the pictures above, and so it hammers nicely against my G-spot.

Once I inserted the Stronic G, I had a fun time experimenting with the different patterns and settings until I found one that I really liked. From there, I mixed it up with some clit stimulation until I came, intensely enough that I actually launched the Stronic G out onto the bed. Whoops. Cleaned it off, re-inserted, and this time kept a hand near the bottom when I came again.

I love using toys hands-free. The Stronic G is a good toy for hands-free fun for the first half of my play, but after that, the same qualities I love – slim, easy to insert – make the toy difficult to keep in place. It tends to shift slightly to the side, keeping the g-spot head from hitting my g-spot exactly, and if I don’t have a hand blocking the bottom or a pillow between my legs, it’s going to fuck its way right out of my vagina.

Also, the slimness of the toy means that while it hits my g-spot pretty well, it doesn’t give me the sensation of fullness I need to come without clit stimulation. I can’t feel all the thrusting because the toy just isn’t wide enough. I have a sense that it’s thrusting, and I can feel it hitting my g-spot, but it isn’t enough that I can come from just that toy alone. That’s okay! I am perfectly happy rubbing my clit while the Stronic G does some deep dicking action.

Did I mention that this pulsator, like all the Fun Factory pulsators, is waterproof? That’s right. Despite how fancy and expensive it feels, you can use it in the bathtub without worrying that something terrible is going to happen to your toy. This feature also makes the Stronic G easy to clean.

Three cheers to Fun Factory for creating a slimmer pulsator with a g-spot focus. I recommend this as a starting pulsator for the reason I mentioned above: it is a more manageable size, which minimizes the uncomfortable silicone drag of a thrusting toy. That said, it lacks some of the versatility of the other pulsators, and if you need girth or don’t enjoy g-spot stimulation, you probably should go with a different pulsator rather than this one.

All told, I think it’s unreasonable that a pulsator will do everything perfectly. Fun Factory is doing a nice job creating different toys for different purposes, and this toy is for those who want a slimmer profile on their insertables and also want g-spot stimulation. If you’re not sure about a pulsator, this is a good one to start with. Know your vagina, though. If a sex shop near you carries these, stop by and hold them. Get a sense of which girth suits your fancy.

The Fun Factory Stronic G is another high-quality, effective pulsator. Price-wise, it’s in the same ballpark as the other Stronic toys. You aren’t going to save money by going with the lighter or slimmer Stronic G. Choose this one if you’re new to pulsators, you love G-spot stimulation, or you prefer slimmer toys.