This Satisfyer Pro 2 review is going to repeat some of the high points of my Satisfyer Pro Penguin review, with a few noticeable differences. But let’s do this in order, shall we?

The Satisfyer Pro 2 comes in a sleek white box with the standard Satisfyer cursive logo and a straightforward picture of the toy. It also says “Next Generation,” since this is the Pro 2. It has nothing to do with Star Trek, except for the way it launches me into outer space while I’m using it. But I digress. 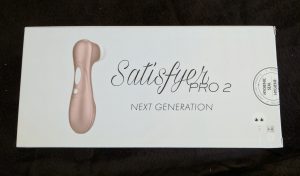 When you open the box, you get a simple plastic shell with the Satisfyer Pro 2 inside along with its charging cord and directions. 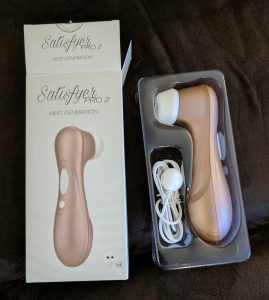 Once you pull it out of the package, you can see the design of the Pro 2 more clearly.

The suction nozzle of the Pro 2 is far thicker than the Penguin. The actual hole is about the same size, a wee bit smaller, but the silicone gasket around it is much thicker. 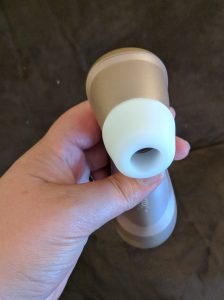 The Pro 2 has an ergonomic handle that fits well in my hand. 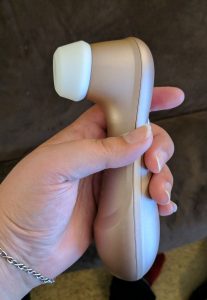 The buttons to control the toy are on the back, unlike the penguin. Also unlike the penguin, there is a separate power button. You have up, down, and off, rather than holding “up” to turn the toy on or off. It has 11 settings, and I cycled through all 11 while I held it in my hand. As near as I could tell, the sensation got more like vibration and less like suction as I reached the higher levels. It was so strong, I couldn’t distinguish well. 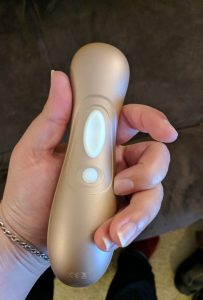 The Pro 2 charges by magnetic charging. The charger attaches to the bottom of the toy, and you can see the conduits in this photo below. 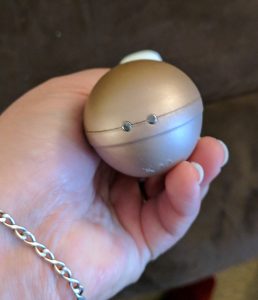 I’m going to try to write this section of the review without any comparison to the Satisfyer Pro Penguin, but instead just looking at the Satisfyer Pro 2 in its own right. If I had no knowledge of the Penguin, what would I think?

When I first used the Pro 2, I wasn’t sure what to expect. I had a bit of trouble fitting it precisely over my clit. I couldn’t really tell if it was in place or not. The silicone surrounding the nozzle is so thick, it was contacting all around my clit, so I felt sensation everywhere. I couldn’t determine if I had it lined up right until I turned it on. So I turned it on.

The Pro 2 has a pretty strong suction right from the beginning. Not “rip your clit off” suction, but steady suction. It definitely feels like suction, too, with a bit of tapping against the clit. The toy has 11 settings, as I said earlier, and I wanted to test many of them out. Level one was strong, but I knew it wouldn’t get me off. I cycled up to three, and three was pretty damn intense. I played with settings three and four while I ramped up to orgasm.

The Satisfyer Pro 2 doesn’t make me come like the way other toys make me come. Instead, it rips the orgasm out of me. When I took the Pro 2 all the way to orgasm for the first time, it was the kind of orgasm I feared, the kind that built with a fierce tightness so I knew it was going to hurt even as it felt good. And, yeah, it does hurt. It’s too intense, too strong, too overwhelming, the kind that makes me seize up and lose my breath and fight between the desire to ride it out and the need to turn off the damn toy and get a break.

It’s no secret on this blog that I fell in love with the Satisfyer Pro Penguin at first sight. I wrote a whole love letter to it, practically, in my review. I also talked about it in an episode of Come and Play and recommend it frequently to my friends.

To be honest, I still think I like it better than the Pro 2.

The Pro 2 and the Pro Penguin are similar toys, but the style of suction is different. As near as I can tell, the Penguin is more gradual, with more patterns of air and less intense sucking. This could be entirely subjective, but it’s my experience. The Pro 2 ramps up more quickly and intensely.

The Pro 2 seems to develop a stronger suction than the Penguin. For me, that leads to the intensity I love/hate. They both work with my hood piercing. The Penguin’s nozzle fits over my clit more easily and quickly than the Pro 2, but I can line both up without too much effort. I think I’m just more accustomed to the Penguin.

The Penguin is a lot quieter than the Pro 2. The Pro 2 isn’t loud, per se, but other people in the house are going to hear it if you’re trying to hide it. They probably won’t hear the Penguin. Either way, they’re probably going to hear you if you come as loudly as I do.

So Which Should You Get?

I don’t, however, have an option where you get none of them. If you have a clitoris or you love someone who does, you need to get a suction toy. I can’t recommend the Womanizer until I try it, but I can recommend Satisfyer enthusiastically and without reservation. Choose one. Order it. Have lots of orgasms. Thank me later.

8 thoughts on “Satisfyer Pro 2 Review: The Fourth Day of Dicksmas”