I have a Zumio review for you folks, and please, I know that “zoomingly” isn’t a great adjective to go with intense. But I am at the mercy of the punny review title, and I can’t make an exception here. We are all slaves to language. But I’m not here to talk about language; I’m here to talk about this super powerful focused clitoral stimulation device.

I first saw the Zumio last summer on a visit to Provincetown, Massachusetts, the wonderful Gaycationland of New England. Although I have chaperoned numerous senior class trips to P-Town, I finally got to go without students and therefore visit the fun sex shops. Toys of Eros is a lovely toy shop right on Commercial Street, and I spotted the Zumio on display. I eventually requested a review copy, and the generous folks over at Zumio sent me one in exchange for this honest review.

The Zumio box is beautiful. It’s a white box that clearly depicts the toy itself, and there are holographic swirls decorating the surface. It’s artistically pleasing. 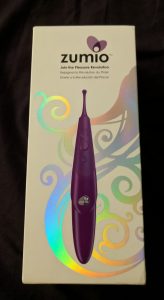 The bottom of the box gives instructions on how to use the Zumio. I love that the little cartoon people are not clearly gendered; women aren’t the only people with clitorises.

Once you open up the sleeve, the Zumio box itself is set up in a rigid box with a lid that lifts off. This type of rigid box is called a “neck box,” and you can be damn sure I googled “types of boxes” to bring you this highly relevant information. 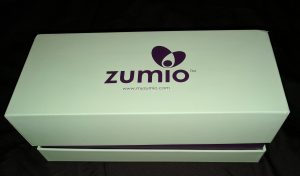 When you open the box, you might — like me — open the entire thing upside down and not realize why there is no sex toy enclosed. Hopefully, you will be less of a dumbass. When you open it the correct way, though, you see all this cool stuff. 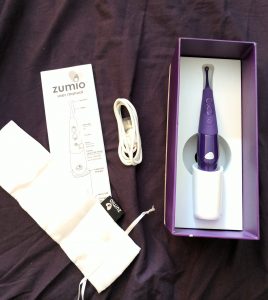 You’ve got the Zumio itself, which is the purple electric toothbrush-looking thing, and then a tiny plastic cup that is the Zumio’s charging mechanism, some instructions, and a USB charging cord.

When I picked up the Zumio, I was surprised by how incredibly light it is. The body is plastic, and the tip is coated in silicone, and the whole thing just weighs a few ounces. 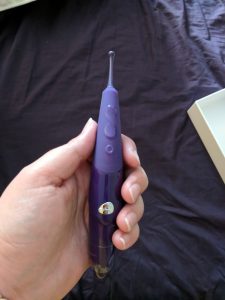 The Zumio has a power button as well as an up/down control that looks like an infinity sign. The surface is coated with silicone and it’s easy to find the buttons without looking. 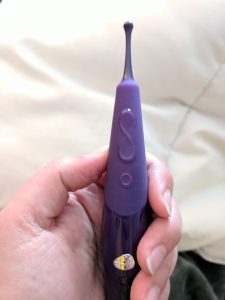 The Zumio has no visible charging port, and that’s because it charges through its cute little cup-thing. You plug in the cup, set the Zumio inside, and it charges like magic. More like induction, but magic just sounds cooler. 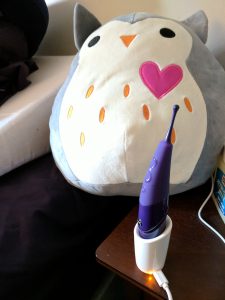 Here’s the Zumio charging next to my Squishmallow owl, just because they are both pretty damn cute.

The Zumio promises precise, intense clitoral stimulation, and it delivers on that promise. The moment I turned it on, with the business end nowhere near my own business, I could tell this was going to be a powerful toy.

Actually using the Zumio, I noticed a few things right off the bat. First off, the Zumio is decently quiet…unless, like me, you have a hood piercing. The Zumio rattles SO LOUDLY against that piercing that it is almost comical. I don’t mind, but for the percentage of people out there with hood piercings, please know what you’re in for.

The Zumio has deep, resonant, intense “vibrations.” It’s not buzzy, even though it sounds buzzy, and the stimulation travels nicely throughout the internal portions of the clitoris. If you press harder, the stimulation is less intense but deeper, and pressing lightly gives a more intense, surface stimulation. For me, though, even on the very lowest setting, the Zumio is almost too intense for me to put it directly on my clit.

I say almost, but in truth, it’s just that the Zumio is crazy focused, and that kind of intensity scares me away unless I buckle through it. I can use the Zumio a bit to the side of my clit, or up above the actual head, over the hood. But when I align that fucker precisely with my clit, WOW. It’s like an electric shock. And when I finally gritted my teeth and did it, for you all, for science, the Zumio zoomed me full-speed toward an orgasm in no time flat. I found that pressing a bit helped take away the “oh it almost hurts” sharpness. This gave me stimulation that hit all the internal portions of my clit.

Orgasms with the Zumio, for me, are the kind of sharp-fierce that leave me breathless. I’m always tempted to pull the toy away at that crucial juncture because it hurts so good, but sticking with it is the better option. Even on the lowest setting, I can get off lightning-fast, and the orgasm itself is fucking mind-blowing.

Another bonus of the Zumio is that the vibrations resonate without me having to hold my various foldy bits out of the way. Sometimes vibrators aren’t strong enough to keep vibrating unless I hold my labia apart. The Zumio, though, does just fine with my anatomy. The handle also doesn’t vibrate, so it’s really comfortable to hold.

Who Would Be A Good Zumio Candidate?

When some toys are so focused, so precise, like the Zumio, it’s helpful for me to think in terms of who would be an ideal candidate for this toy, and who would not be. If your clitoris is delicate enough that any direct sensation is uncomfortable or painful, you would probably not like the Zumio. Yeah, you can use it off-center, but it’s going to be less effective this way. In that case, you might as well get a vibe with a larger head and less focused stimulation. (Or get the Zumio S, addressed briefly below.)

All For the Clit?

I mention clitoral stimulation throughout this post, but the folks behind Zumio market it toward more than just the clit. It’s also great for nipples, for penises, for other erogenous zones, but I’m not gonna be coy, here: it’s built for the clit. You can use it elsewhere, but it’s designed to provide focused, pinpoint clitoral stimulation.

The Zumio is light, easy to hold, and made of body safe materials. Awesome. It’s going to be a great option for people with limited hand strength, since it’s not so heavy to hold as the Hitachi or other wand-style vibrators. It’s also a powerhouse, with deep, penetrating vibrations, at least on the lower intensities. I’ve read some reviews that say the vibrations get decidedly buzzier as they get stronger. It seems that way to me as well, but I don’t intend to use it on those higher settings.

The Zumio is almost too much for me. In the time since I first saw the Zumio, they now produce the Zumio S, which has a shorter, softer head and more gentle sensations. The original Zumio is now called the Zumio X. So I suppose a caveat is that the Zumio might be too much for you, too. You should consider your own masturbatory preferences before choosing the X or S.

While I was unsure about the focused intensity of the Zumio at first, it has quickly become one of my favorite toys. I keep returning to it because it’s got a lot of variety built into what at first seems to be a fairly one-trick pony of a device. Varying intensity, pressure, and location turns one toy into many, and I’m excited to keep using it.

Thanks to the folks at Zumio!

This post uses affiliate links. Purchasing products through these links helps benefit the site. We appreciate your support.