It’s so great to be back blogging again after months spent balls-deep in writing and editing novels. This year has started out at full steam, and this is pretty much the first breather I’ve had since the new year. So let’s get back into the swing of things, pardon the pun, with a toy meant for swinging: the Trip 2 Tawse from Tantus. This Tantus Trip 2 Tawse review rolls trippingly off the tongue, doesn’t it?

Note: affiliate links are used in this post. Their use helps support this blog.

The Trip 2 Tawse, henceforth only called the Tawse, is a silicone impact device with two long tongues. According to Tantus, and Wikipedia, the tawse (pronounced taws) was a corporal punishment device used in Scotland until 1987. Tantus, like all good companies catering to the kinky among us, has produced one for your impact play pleasure. 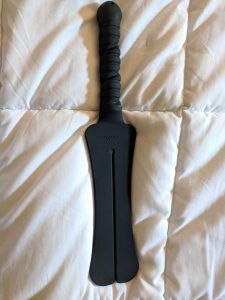 In hand, the Tawse is a good-quality silicone, appropriately floppy at the business end, with a heavily textured handle that one could fuck, if one were so inclined. I would normally be into that, but the hole in the handle (where it has a loop for hanging) would be difficult to clean. I might still fuck it. Jury is out on that.

Hitting my arm with the Tawse, it was easy to see that this would be a serious impact toy for someone like me who gravitates toward lighter smacks.

My husband and I haven’t done much impact play for a while, but he was happy to roll up his sleeves to test the Tawse with me. I’ll give my review from the business end, and then I’ll share his thoughts on being the one holding the handle.

The Tawse hits hard. Most silicone toys do, but with the length of the strips and the flexibility of the silicone, it’s got a significant amount of sting. Don’t let the width of the straps fool you: this toy is far more stingy than thuddy.

I had him hit me with several other implements for immediate comparison. The Tawse feels closest to being hit with a belt folded in half. It has that type of sharp sting, and the width of one strap is similar to that of a belt. It is more stingy than a leather paddle, but less stingy than a crop, since it’s hitting a wider area.

He did not have to give me very many hits before I was laugh-yelling and telling him to stop. In an actual impact scenario, the Tawse would push me quite a bit, but it was a very satisfying sensation. My ass blossomed up really red in no time at all.

My husband says the Tawse had a good handle and was easy to hold, but was quite difficult to control in action. The ends were really floppy, and it was difficult to aim the toy precisely where he wanted it. He’s had a good amount of experience throwing impact toys, and we’ve even done some classes together, but he had to focus quite a bit to not accidentally hit my tender upper thighs (by going too low) or my kidneys (by going too high).

Also, for those not accustomed to using silicone implements, they feel a lot more playful in the hand than they do on impact. He mostly just had to “drop” the ends of the toy on me for it to sting. If he gave it a full swing, like he might with a paddle or a flogger, he would probably have left a welt right away. If the top in your arrangement is new at impact play, it will be very important for you two to take a few light practice swings with the Tawse before getting into things.

Really, you should always do that, but the Tawse seems deceptively light. It’s not. It’s got teeth, metaphorically speaking.

The Tawse is a unique impact toy that would be ideal for intermediate players. You don’t need to be an expert, and you don’t need special training, but you should probably be more than a rank beginner. Also, like with all toys, communicate with your partner and have fun!

The Tawse is for sale through Tantus.