The second day of Dicksmas starts with a bang, or rather, a banging. I’m here to review the Tantus Goliath, which lives up to its name in a pretty significant way. This Tantus Goliath review is a new frontier for dickings and for my vagina.

Note: the days of Dicksmas do not correspond to any actual calendar dates. Dicksmas follows its own time schedule, and that is time for dicking.

Affiliate links are used in this review.

After I tried the Tantus Echo Super Soft, I thought I might be ready to try the next step up in the Super Soft line. I saw the Goliath Super Soft, checked out its generous dimension measurements, and decided my vagina was game for a new adventure.

It seems, though, that Tantus has two toys both named Goliath: The Goliath Super Soft, which I thought I requested, and the regular Goliath. Both are approximately the same price, both nearly the same dimensions, but (apparently) quite different in texture. The Goliath which arrived was not soft by any means, instead having the firmness like a very rigid silicone. It wasn’t until I started to write this review that I realized there even were two toys named Goliath, and that I seem to have received the one I didn’t expect.

I’ll talk about the ramifications of this mix-up soon. First, the unboxing.

When the box from Tantus arrived, I opened it up and was momentarily terrified. The package inside was toy-side-down, so all I could see was the size of the container. 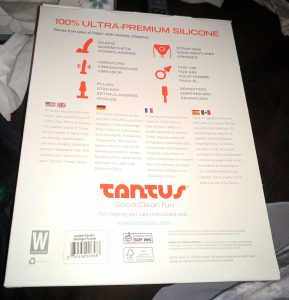 Then I flipped the box over and realized the box is not 100% giant dick: Goliath comes with accessories.

He is supposed to come with a suction cup attachment and a bullet vibe attachment. My bullet vibe wasn’t in the package, but I didn’t really mind. I wasn’t interested in a vibrating Goliath. 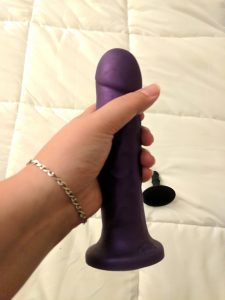 As you can tell from this picture, the Goliath is a generous-sized toy. It’s over seven inches of insertable length, and 1.7″ in diameter. That’s across, folks. Not around. Diameter, not circumference. Wow. 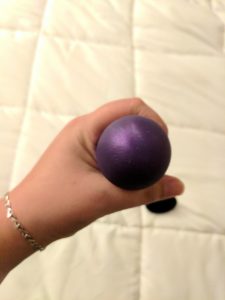 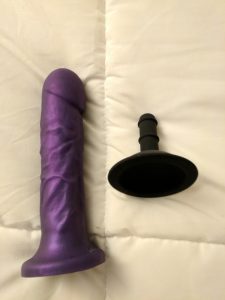 Out of the box, the Goliath is a girthy toy. The veins are veiny. The texture is solid, no give to it at all, just rigid and quite firm. I was flabbergasted that this was the Goliath Super Soft, since the Echo was all bendy and this fucker was…. not.

I probably should have known at this point that something was amiss. But instead, I decided that “Super Soft” might be a brand instead of a descriptor, albeit a really misleading one in this case, and I resolved to giving this guy the old college try.

I experimented with putting the suction cup into the base – it has a hole for the top of the suction cup attachment to fit in – but it was a snug fit. Even though I didn’t insert the base all the way into the toy, it was quite challenging to remove the suction cup again. I feel like if you want a suction cup toy, this Goliath – once so outfitted – is gonna be one for life. Suction cups 4lyfe, yo.

Let’s get this out of the way right away: this toy, for me, is not a quick fuck. I can’t get a bit turned on and slide this dick all the way home. It is definitely at or near my maximum for girth, and since it’s got a really blunt head, that girth comes all at once. No easing into the size with this guy.

I say this on many posts, but in case you are reading this blog for the first time — wow, you started here? — I’ll say that I don’t have problems with lubrication. One of my partners affectionately calls me a Slip-n-Slide. Even with my copious fluid production, I needed a generous amount of lube for the Goliath. I edged beforehand so I was really loosened up, lubed the head and shaft, and worked it inside.

That first moment of getting past the coronal ridge, where the whole head was finally inside, it was a bit of a relief. Not a lot of relief, though. The whole shaft is almost as big as the head. But at least the most intense part was past my pubic bone. With the head inside, it wasn’t too much trouble to work the rest of the toy inside. Well, not all seven+ inches. I can’t take all of that. I can take most, though, and I had a good time finding that end point.

I, like many vagina-owners, really love the feeling of getting stuffed. I don’t get into really giant dicks, since I have a moderate girth limit, but that full-penetration-sensation? Glorious. The Goliath makes me feel stretched like few toys do. It’s really easy for me to engage in my “giant guy making me take his mammoth cock” fantasies when I’m using the Goliath. This is not a toy for a gentle bubble bath orgasm. This is a toy for some stuff-me-like-your-Thanksgiving-turkey wanking.

I mean, you can use it in the bubble bath if you want. You do you.

The ridge on the Goliath hits my g-spot beautifully. Because the toy is so big, I can really feel the veins as I move it in and out. That can be really nice. It can also be fairly uncomfortable, to be honest, especially if I start to dry out. I ended up settling on deep penetration with short strokes, hitting my A-spot rather than my G-spot, and that was a good choice. With some steady clit stimulation, in no time at all I was flying over the edge to a toe-curling orgasm.

Once I came, I had the task of removing the Goliath. This was almost as challenging as inserting it. Getting the head back out also felt like a test of my vagina’s elasticity, especially as it slid back down past my pubic bone. I didn’t have the advantage of arousal to soften the discomfort. Yikes. Maybe more lube next time.

I did not use the suction cup for Goliath. After using the toy for on-my-back penetration, I know that I would not be anatomically comfortable mounting this toy from another direction. That said, the suction cup is very secure, and I’m confident you could fuck the hell out of this toy on a suction-friendly surface.

Super Soft or Not?

Who Should Slay Goliath?

This section is normally pluses and minuses, cheers and caveats, with the balanced good/bad of the toy. I’m going to do things a bit differently here.

So let’s look at the Goliath in those terms.

The Tantus Goliath (non Super Soft) is good for people who like firm, girthy penetration. If you like your toys on the hefty side, but not necessarily the “it’s as wide as my arm” extreme, then the Tantus Goliath is a great choice. If your vagina (or your partner’s vagina) likes deep penetration, including a-spot stimulation, you can get that with this toy. Also, with its flared base, it’s well-suited for many types of harness play.

Goliath is a mighty beast, and while not a giant – trust me, I’ve seen some terrifying shit on the internet – it is worthy of its name. If this sounds like a fun toy, go pick one up from Tantus and do some giant-slaying yourself.

Now I need to try the Goliath Super Soft and compare these two name-twins once and for all.

One thought on “Tantus Goliath Review: 2nd Day of Dicksmas”