Skip to content
Posted on July 5, 2018Author Elia Winters 6 Comments on Satisfyer Pro G-Spot Rabbit Review: Close, But Not Quite

All right, I finally present to you my Satisfyer Pro G-Spot Rabbit review. Satisfyer sent me this toy in exchange for an honest review. I wanted so badly to love this and everything that Satisfyer makes, but unfortunately, this is not a win for me. I like Satisfyer’s suction. I like g-spot stimulation. So where did this toy go wrong? Read on, dear friend.

Note: affiliate links are being used in this post. 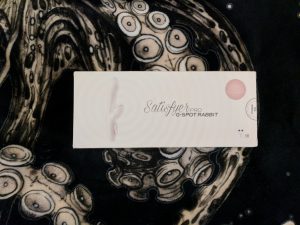 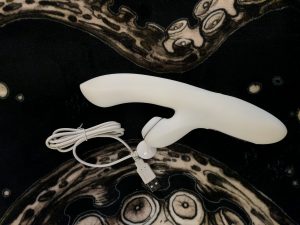 Here’s what it looks like in hand from the side. 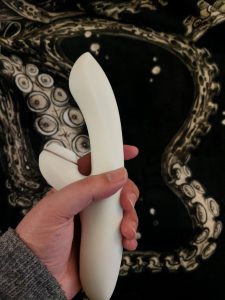 And from the top, so you can see the width of the insertable portion of the toy. 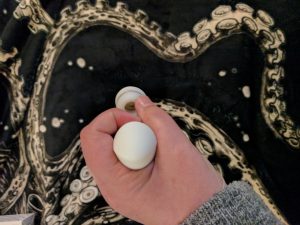 The controls are, at first glance, straightforward, but there’s a lot going on here. 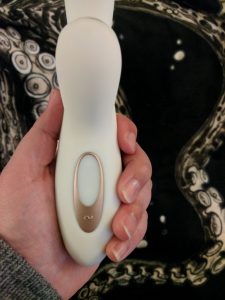 The white part of the controls manage the suction of the clit arm. You hold one side of the white panel to turn the suction on, and then control its strength by toggling up or down on that panel. Although the controls are difficult to discern visually, the control panel has texture on the “up” and “down” parts, so it’s easy to feel where to push.

The rose gold portion of the control panel has just one button at the bottom, and it turns on the vibrations within the shaft. Pushing this button cycles through three vibration speeds and seven patterns.

Here’s a better look at that clitoral suction arm: 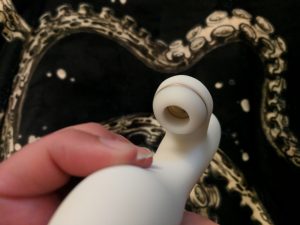 The USB-style charger attaches to the toy through magnetic charger, allowing the g-spot rabbit to be totally waterproof. 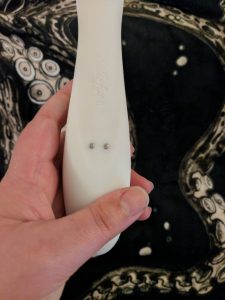 In hand, the Satisfyer Pro G-Spot Rabbit feels silky-smooth. It’s a silicone texture I’ve felt on other toys, sleek and soft, not a sticky type of silicone. It feels luxurious, with a silky texture and thoughtful amount of girth, enough to notice but not enough to be uncomfortable for most vagina owners.

The Satisfyer Pro G-Spot Rabbit combines two great ideas: an insertable toy focused on the g-spot and an external suction arm. But when I tried to use it for the first time, I became quickly aware of why this toy was not going to work well for me.

The shaft of the toy, well-proportioned, slid inside easily enough with a bit of lube. I normally make my own lube pretty effectively, but I couldn’t use this toy to warm up beforehand, since it requires insertion. No problem; lube is a gift from the gods. Once the shaft was inserted, though, I couldn’t line up the suction arm properly with my clit.

Because that’s the crux of the problem: although the insertable part of the shaft is somewhat flexible, the part where the bottom of the shaft meets the clitoral arm is fixed. The clitoral arm itself, filled with various technical suction devices, does not bend or angle. 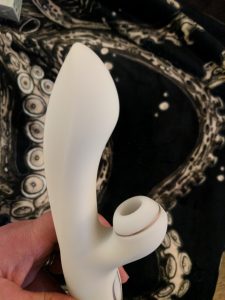 So, if you can see that picture above, this toy requires your clit to fit roughly in that hole when the shaft is inside you, and at roughly that angle. It’s a distance of almost exactly 1″ from the center of the hole to the closest edge of the shaft (I measured). I’ll bet for many clit-owning people, this works great. But for me, this doesn’t quite line up. The toy kept wanting to suck my urethra, not my clit. As anyone who’s used a suction toy can tell you, “almost” means nothing when it comes to placement. It’s either sucking your clit or it is not.

I was able to get the suction lined up on my clit by pulling the shaft most of the way out and then getting a firm suction on my clit first, with a lot of weird angling. I was, eventually, able to keep the suction in place and also have the shaft inside me. Small victory, even though it kept wanting to slip out of place.

Then there was the matter of the g-spot section itself. My g-spot requires firm pressure. I get that firm pressure by thrusting against that part of my vagina. But if I move this toy, if I thrust it at all, I break the suction away from my clitoris. That’s right; you can’t thrust this toy and still keep the suction. You can rock it, sort of, but it’s not thrustable.

For me, the vibrations distracted me too much from the more delicate suction in my clitoris. The vibrations were strong, but too strong in comparison. I couldn’t feel that pleasant, toe-curling suction that made me fall in love with Satisfyers to begin with.

I did reach orgasm with this toy, but the whole time, I felt like I was almost experiencing awesomeness, but not quite.

I can definitely envision a subset of vagina-owners who would like this toy. Is this you?

I appreciate Satisfyer trying to make a suction toy with an insertable arm. My orgasms are better when I have something to clench around.

Also, it’s great that the G-Spot Rabbit is waterproof, since fun isn’t limited to dry places. Similar kudos go to having a magnetic charger that is usable across all Satisfyer devices.

Kudos to the price point: at $89.99 from Lovehoney, it’s not cheap, but as luxury sex toys go, it’s cheaper than many alternatives.

Caveats: as I’ve said before, this toy requires a particular anatomical construction to work as designed. If everything lines up perfectly, I imagine this toy is amazing. Since my parts are a bit off, the toy was a bit “off” as well.

6 thoughts on “Satisfyer Pro G-Spot Rabbit Review: Close, But Not Quite”