It’s my first post as an Official Sex Toy Reviewer, and I can think of no better way to start than with my Eroscillator Review. I received an Eroscillator Top Deluxe in exchange for an honest review.

I’ve long referred to the Hitachi Magic Wand as the Cadillac of vibrators, and if that’s true, then the Eroscillator is the Lotus Exige: Elegant with precise handling and top performance. I have a Hitachi, and it’s got its place in forced orgasm play, but I never was a big fan of the “shock and awe” campaign it inflicted on my genitals. Sometimes it was overstimulating rather than pleasurable. Also, at the moment of orgasm, the vibration was so strong as to be painful, but backing off from the direct contact diminished the orgasm too much. Frankly, the Hitachi is not my go-to vibrator like it is for many women.

Spoiler alert: the Eroscillator is amazing.

Let’s start from the beginning.

Getting to know the Eroscillator 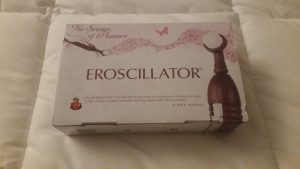 The packaging is a little floral-feminine for me, but I don’t care about any boxes but the one between my legs. Inside, there was a LOT of stuff. 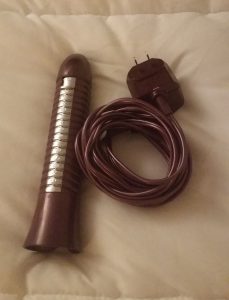 The actual body of the toy is a little bigger than an electric toothbrush. It has a generously long power cord, nice if (like me) your closest free outlet is not right next to the bed. And then there are the attachments. 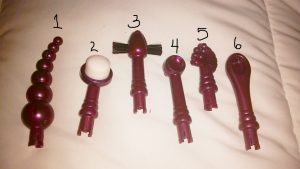 Look at all the attachments!

They even have really stupid names that I love.

I’m a pretty simple girl when it comes to toys: I like my toys to do one thing and do it well. So honestly, I was a bit put off by so many different heads. What to do with all these options? Well, try them, of course.

Getting to know the Eroscillator… intimately

I decided to start with the “soft fingertip” attachment. I also decided to stick with low speed for this whole test. The Eroscillator oscillates, rather than vibrates, so it moves back and forth very fast, producing an interesting sensation. I liked the fingertip attachment, but I didn’t want to settle there, so I switched to the “Golden Spoon.” The literature said this was a favorite. 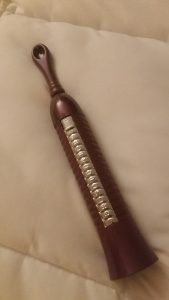 Immediately, I could tell why. This attachment was designed to fit right over the clitoris, providing a clear and focused stimulation. I wasn’t sure how it was going to work with my hood piercing, but there wasn’t even a rattle, and the piercing didn’t hinder the oscillation in the least. It took me a few minutes to find the exact right spot, though: lots of spots felt really good, but on moving it around, I found the exact spot, and suddenly I didn’t want to move at all. I decided to try relying on nothing but the oscillations: I didn’t move the head in circles, as I often do with a vibrator, and I didn’t use any toys for insertion, just focused solely on this one device.

The first thing I noticed was the transmission of the sensation. I could feel the oscillations traveling down the nerves of my clitoris to its internal branches, so it felt like I was being stimulated in my g-spot even with nothing inside my vagina. I’d read another review that mentioned this experience, so it wasn’t a total shock, except that the sensation was a total shock. Like, holy fucking shit. That’s new. I didn’t think my clit could surprise me.

My orgasm from the Eroscillator was absolutely nothing like other orgasms I’ve had before, and trust me, I’ve had a lot of orgasms. I consider myself a pro at giving myself orgasms. My orgasms tend to be very sharp and strong, intense and overwhelming but focused. My orgasm from the Eroscillator built from my knees. I’d never had that before. I just let it happen, curious about the way it was going to feel. I didn’t have the urge to pull away like I usually do with the Hitachi, no sense that it was going to hurt rather than feel good. It was a slow build, but inexorable, like a snowball rolling downhill and gradually picking up speed. When I actually came, it felt broad, a whole-body orgasm, all my nerves firing at once. I realized somewhere in there that I hadn’t closed my eyes like I usually do, but my vision had glazed over.

Normally, I reach a point during orgasm where the sensation is too much, and I have to pull away. I didn’t get that way with the Eroscillator. My clit didn’t get overstimulated. I left the attachment in place as the pleasure continued to roll over me, waves of it, slow and soft but steady, and this continued for a ridiculously long time. Maybe five minutes. I couldn’t tell if I was continuously orgasming during this time or building toward another, because the pleasure was not overwhelming, but I kept having intermittent vaginal spasms that indicate continuous orgasm to me. After a little while, I felt another orgasm building, this one sharper, and it overcame me with much more intensity. Then I turned off the toy and set it aside, a little shaken. At no point did my clit become uncomfortable. MIRACLES.

It was at this point that the toy earned a nickname. Anything that can make me come like that gets a nickname, and that’s when the Eroscillator became Rossy.

Rossy came out again a couple of days later. If the toy alone was good, it must be amazing when combined with insertion, right? I used my silicone dildo along with Rossy, keeping the Golden Spoon attachment. This time, the sensation of internal stimulation was compounded by actually having a toy in my vagina. My climax arrived much faster. I tried the Eroscillator on medium speed, which was much more intense, and this time I had the overwhelming “this is going to hurt so good” feeling right before I came. This orgasm was sharp, fierce, overwhelming, full-body, toe-curling, every cliche imaginable. I finished shaken, again. 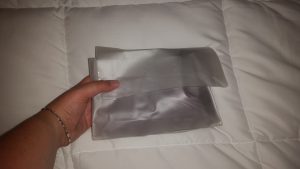 I have a few quibbles with Rossy. The attachments aren’t silicone, and for someone who uses nothing except silicone, glass, and steel, that’s a big concession for me to make. They also require some detailed cleaning. As someone who uses sex toys with more than one partner, I just want to be able to throw stuff in the dishwasher to sanitize it, but that’s not an option.

Other people say it’s ugly, but I don’t feel that way at all. I think it looks Steampunk.

My main negative – and this is mostly just a warning – is that the Rossy is expensive. Like, well over $200 for the kit I have. That’s not a small amount of money to spend on a sex toy. That said, having had the experiences I’ve had, I would definitely purchase this device. I would save up and shell out and never regret a single dollar.

What’s next for Rossy and I?

I have some next steps: I’d like to try this toy during penetrative sex, and I haven’t done so yet. I’d also like to have a partner use this toy on me. I’m also hoping to use this toy on a partner and see her reactions, too. As of yet, I’ve only used Rossy solo, and I’m hoping that changes soon. When it does, you can expect an update.

Until then, I’m ruined for other vibrators, and I’m madly in love with Rossy.

5 thoughts on “My Eroscillator Review: A Love Story”