Skip to content
Posted on April 27, 2016Author Elia Winters 4 Comments on Oh the Dicks You Will See: Adventures in Sexting with Strangers

Wow, that’s a sentence that wouldn’t have made any sense twenty years ago.

How I fit into this situation is that I’ve got a Kik and I have sex talk with interesting people. This has led to a year’s worth of adventures, a year’s worth of stories, some lovely people and some total jerks, and more dick pics than any person wants to see.

But what about my marriage?

You may be wondering how anonymous kik sexting with strangers fits into my existing relationship. Am I just terrible at keeping secrets and hope my husband doesn’t read my blog? Am I desperately looking for fulfillment in the digital arms of strangers? None of the above. I love my husband. We have a fun, healthy relationship. We’re also kinksters, and part of that kink is playing with other people via chat. He does it, I do it, and we share stories afterward. That’s our dynamic.

Which brings us to my adventures in Kik play.

The Hall of Shame: Don’t Be That Dick

Just like actual sex can be terrible, so too can chat sex be terrible. When you’re a submissive woman, you’re the target of an endless ocean of wannabe “Doms” on Kik. Dick pics as far as the eye can see, or an introduction that starts by ordering me around, bad manners in general, or some combination thereof.

“Bob” and I chatted for a bit, but never actually played, because he didn’t have anything real to say. Plus, he didn’t have any sense of timing. I told him when I was working, but he would message me all hours of the day and night with “hey,” and when he wouldn’t get a response, would try an hour later. I told him I didn’t want to chat and directed him to some chat groups on Fetlife, where he actually asked to borrow my login. 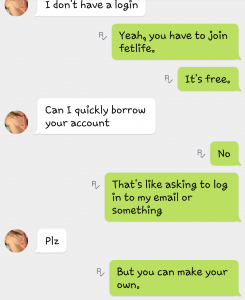 Yup, that’s a dick pic for his avatar. Of course. He later came back to me to whine about how there weren’t any groups, he couldn’t find them, and would I please find him kik groups and link them. Needless to say, “Bob” and I didn’t last very long.

Another class act was the Domme whose chat got deleted and therefore, no screen shots. We were playing wonderfully: she was giving me instructions, I was following them and sending her photos, and then she asked for a video, to which I said no. (I don’t do face pictures or videos.) Then she just… stopped messaging. In the middle of a scene. We’d been playing for almost an hour. Things had been happening. It was quite rude.

My favorite, though, is Captain Nonsequitor, who had no sense of subtlety at all. We had some sexy chat, and then he became demanding, all the time, while I was clearly unavailable. 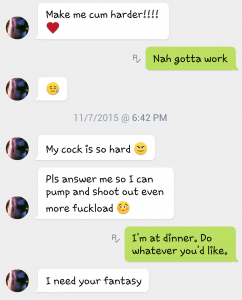 After that one fun session, he began to believe that his cock was my responsibility. 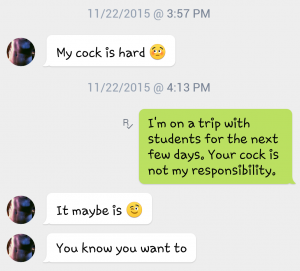 No, Captain. I definitely don’t want to.

The crowning achievement, though, was his “Happy New Year” message. I thought, hey, an actual greeting that doesn’t involve his cock! Maybe we can have a conversation. 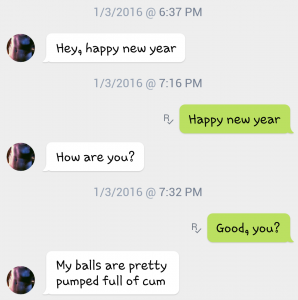 I have not messaged the Captain back since, and he took the hint and has not messaged me again. Stay tuned, though, because he might pop up again with another unexpected status on his balls.

The Best of Times: Being a Great Kik Sext Partner

Despite these dicks, there are great and fun people on Kik as well, and I’ve had a wonderful time playing with them. Based on my experiences, here are some ways to be a great partner for someone if you’re sexting them on Kik. I’ve geared my examples toward guys, but it works for both sexes:

If you follow these rules, you’ll be set to initiate some conversations and maybe meet some new friends.

Is Anonymous Sexting for You?

There are lots of benefits to this kind of sex play, and if you’re single or in a relationship where this fits with your and your partner’s comfort level, you might find it’s fun.

First off, it’s anonymous. You can rig up a dummy email and chat with people without anyone knowing who you are, as long as you’re smart about the information you share. Anonymity is a plus.

It’s also a great way to practice your dirty talk skills. If you’re more skilled with words when you have time to plan them and think about them, but you get shy in bed, anonymous Kik play is a place to practice and type rather than talk.

Finally, when it works well, it’s hot! You’re sharing with a partner with no commitments, you get to explore your own likes and dislikes, and you can make up whatever fantasies you want.

You’re going to get creeps. You’ll get people you have to block. But you’ll also probably meet nice people, too, and fun people, and people you can just talk with about anything. I’ve made some close friends through a Kik group, and maybe you will, too.

Just be prepared for a lot of dick pics.

4 thoughts on “Oh the Dicks You Will See: Adventures in Sexting with Strangers”