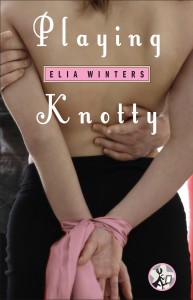 Emma Green has never been very confident. When Ian Cooper, an old friend, asks to rent out the back room of her bookstore for a bondage workshop, she agrees because she needs the money. She isn’t expecting to participate, and she definitely isn’t expecting to enjoy it. But all of Emma’s expectations fly out the window when she tentatively agrees to be Ian’s bondage model for workshops and exhibitions—and her success in the role upends all previous notions she had about her body and her desirability.

Now, Emma must learn to reconcile these conflicting images of herself while dealing with another conflict: Is Ian just another playboy, or everything she’s been looking for?

In this excerpt, Emma has recently given her old friend Ian the go-ahead to run a bondage workshop in the back of the bookstore she owns. Her own curiosity – and attraction to Ian – has gotten the better of her, and while on the phone with him, she finds herself unable to control the direction of her thoughts, or her fingers.

With Ian on the phone and not right in front of her, it was easy to let the next question slip out. “And what . . . happens at one of these workshops?”

The silence that followed her question made her wish she hadn’t asked, but she had to know. It was professional curiosity, she told herself. As the owner of the establishment housing the workshop, she needed to be informed and aware of what was going on in her own back room. It had nothing to do with the fact that her body was tingling just from thinking about what Ian might answer.

“Well,” he began, “I usually open the event up to six or seven couples. This is a beginner class, so I don’t take things very far. Basic ties and knots. I bring a model with me to demonstrate on, and the guests get to practice on their partners.”

“Oh.” The word came out more breathy than Emma had intended, and her heartbeat was racing as if she’d been trying to catch a bus. “You, um, have a model?”

“A bondage model, yes. I usually ask someone from my local FetLife group. My friend Lizzy helped me out last month and said she’d do this one, too.”

“I pay her. It’s not like she has to take her clothes off for these workshops. It’s a pretty easy gig. She just sits there and lets me . . . tie her up.”

Emma pressed her lips together to keep from making a noise; the whimper that had risen in the back of her throat at that idea was completely shameless. She realized her hand was resting right inside the waistband of her pajama pants and underwear, fingertips teasing against the soft curls. Oh, fuck, what was she doing? This was . . . out of control. Completely inexcusable. They were having a normal conversation, for crying out loud.

“Oh,” she managed after far too long a period of silence. She could faintly hear him breathing, and she slid her hand down an inch lower, brushing lightly at the V of her thighs, heart positively racing. This was not something she did. It was crossing a line, more than one line, probably, but with a fingertip teasing her clit, she couldn’t bring herself to care.

“Now, the advanced classes are different.” Ian’s voice might have been lower, or she might have been imagining it. “In those classes, I handle all kinds of elaborate ties. Sometimes my model needs to take some of her clothes off.”

“Yes, I saw. I . . . went to your website.” The sentence slipped out in breathy confession, her finger rubbing more deliberately, and fuck it all if this wasn’t the hottest thing she’d done in distant memory. “To see what you do. What to expect. At . . . at my shop.”

She heard him breathe in, a faint inhale that was a touch louder than normal. “And what did you think?”

“I think . . . it seems like . . .” Emma couldn’t seem to find the right words; she eased off of her clit, hovering too close to climax, body tensing and searching for release. “The people participating really seem to enjoy it.”

Was Emma supposed to say something else? She wanted to keep touching herself, but if she did, she was going to come with him on the phone, and there was no way she could hide that. It had been so long since she’d felt like this, her body loose and quivery and sensitized, hips rolling ever so slightly, seeking contact. The silence stretched on, but then Ian broke it, his voice quiet.

Emma barely managed not to moan, because that question was in no way innocuous. He was flirting with her. Oh, God, did he know what she was doing, fingers pressed between her legs? She closed her eyes and tried to keep her voice steady while her heart hammered against her ribs. “It was unique.”

It wasn’t an answer, and he knew it, but he didn’t push her any further. “You can come to the workshop, if you want.”

“All right.” Emma needed him off the phone right then. “I’ll see you in a couple of weeks, then. The twenty-fifth.”

Ian didn’t say anything for a moment. Had he hung up? Was he not expecting the dismissal? Did he think this conversation was going to continue? “Right. I’ll . . . see you then, Emma.”

Emma barely managed to hang up before she was rubbing hard against her clit and coming, a tumbling flood of sensation and pleasure that made her arch her back and cry out into the emptiness of her apartment.

Collapsing back onto the couch, she took a moment to gather herself before the feelings of guilt washed over her. What if he knew?