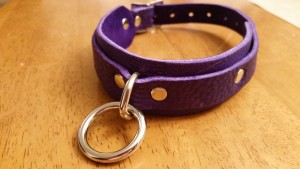 The intent behind the term “alpha sub” is to distinguish between a person who is sexually submissive but not submissive in real life and a person who is submissive all the time. it’s generally used for women; I don’t think I’ve ever seen the term used for a male submissive. An alpha sub is a woman who often has a position of power in her day job, who is nobody’s doormat, and who the casual observer would not guess to be a sexual submissive. The term originated, undoubtedly, as a way to show how sexual submission doesn’t mean weakness, showing that alpha subs can be sexually submissive while not being submissive in the other aspects of their lives. It’s intended to be empowering, I think.

By these definitions, I’m an alpha sub. I’m a confident woman, an extrovert, sex-positive and in control of my life. I don’t need a partner to feel whole. I’m a sexual submissive, but I’m never going to be mistaken for a doormat.

So why shouldn’t you call me an alpha sub?

The term “alpha sub” presumes that there is a default correlation between a person’s role in consensual power exchange – Dominant or submissive – and that person’s life outside of the bedroom. The term assumes that most sexual submissives are submissive all the time, so the ones who aren’t need a special term to define them. If you don’t identify as an alpha sub, you must just be a pushover. The fact that the term is used to define female subs rather than male subs speaks to another prejudice, that female subs are more likely to be “naturally submissive” all the time and therefore need a special term to define the “outliers” who, of course, aren’t really outliers at all. While well-intentioned, it’s another term that separates us and puts us in imaginary competition with each other. “Oh, I’m better than other subs. I’m an alpha sub.”

In the kink community, I’ve met many Dom/mes and subs. Some fall into these roles both sexually and personality-wise, but just as many don’t. In the same way that looking at a stranger doesn’t reveal their kinks, neither does looking at a person in a kink scene reveal their non-sexual personality. Don’t call me an alpha sub because I’m “different than the other submissives.” No, I’m not. Lots of us are confident, outgoing, – dare I say it? – dominant outside of the bedroom. Those who aren’t, the shy ones who tend toward submission all the time, are no less worthy of respect than the confident ones. I try to write a variety of women in my books. Bridget from Purely Professional is confident outside the bedroom and a sexual submissive. Emma from Playing Knotty take a little longer to develop her confidence in real life, but she enjoys both topping and bottoming in bondage. In the upcoming Tied Score, Iris is a confident woman who learns to embrace her sexual Dominant side, but her submissive partner Owen is no shy wallflower himself.

I call myself a sexual submissive because that’s what I am, but it doesn’t mean anything about the rest of my life. When I’m not wearing a collar, I’m a smart-talking wiseass just like anyone else. When I am wearing a collar, I’m doing so because I choose it, because it brings me sexual pleasure, because submission is my kink and kink can be a lot of fun.

Call me by my name. Call me a submissive. But don’t call me an alpha sub.