Skip to content
Posted on February 22, 2013Author Elia Winters 2 Comments on Fangirling: Why I always have and always will

Look up “fangirl” on Urban Dictionary, and the results will be less than flattering. Despite this, though, I don’t mind the term. It adequately names what can only be described as a series of obsessions I’ve enjoyed since childhood. I would delve into some show or film, watching it endlessly, purchasing merchandise, even – as I got older – writing fanfiction. I was a ‘shipper, although I didn’t know the term. Fangirling has defined many stages of my life. In honor of the great world of fandoms out there, I thought I’d walk you through my history, with a little navel-gazing about What It All Means.

My first obsession was Square One TV, specifically Mathnet. I was obsessed with the character of Kate Monday. I’m not sure if she was my first girl-crush or if I just wanted to be her: smart, funny, cute in a 1980s way, unafraid to use a calculator and wear a terribly unflattering suit. My parents bought me the VHS tapes of my favorite Mathnet episodes, including “The View From the Rear Terrace.” (This episode also bears the honor of sparking my interest in bondage, but that’s a different blog post.) I ‘shipped Kate and George, my eight-year-old brain choosing to ignore the fact that he was married.

For those who want to watch the whole episode:

I grew out of Mathnet and into Captain Planet and the Planeteers. This was a short-lived fangirling period in my life, one that was fortunately shared by my best friend. As always in my obsessions, I was drawn into it by a ‘ship: specifically Linka and Wheeler. I’m not sure if they ever did get together, because I soon moved on to more “adult” loves.

Enter Moonlighting. While (thanks to syndication) I came into the show several years after the series had ended, my obsession was no less rabid for being a late-adopter. I spent about two years in the clutches of this magnificent ’80s mystery-comedy-romance, using up dozens of VHS tapes to save episodes for posterity. I was probably a little too young to be watching the series, but my mother’s memory had gone foggy about all the sex (the glorious, glorious sex), and so she didn’t mind. Even now, looking back, I know how brilliant that show was. It was Bruce Willis’s first big break, and the chemistry between his character David and Cybil Shepard’s Maddie was palpable. I admired the couple, yes, but I was also enamored of the quick-witted dialogue, clever plot lines, and hilarious fourth-wall breaks. 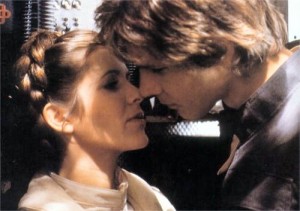 Around eighth grade, I began my many-year love affair with Star Wars. (NB: I know I don’t really need to link Star Wars, but if you haven’t seen Wookieepedia, you should. Now there’s a labor of love.) Here was a fandom made for me: broad in scope and immense in scale, with a wealth of add-on content. Finally, I’d found a world large enough for my obsession. I watched the movies over and over again, read all the books, collected the merchandise, and began writing fanfiction. My personal history of fanfiction could (and will) be its own blog post, but for now, suffice to say that my first two novels were Star Wars novels. It seemed that the only thing that could kill my love of Star Wars was more Star Wars, and the prequels pretty much served that purpose. Perhaps one can only obsess about something for so long before it becomes a bit stale. I’d loved Star Wars since eighth grade, but we’d drifted apart.

After Star Wars, my obsessions became a bit less rabid. I loved X-Files, ‘shipping Mulder and Scully pretty hard. I was in college and the internet had become a thing. I learned about fanfiction, which I’d been writing without knowing it had a name. I published my first fanfiction online. (It’s still out there, by the way, archived on the internet under a pseudonym. I don’t think I’m ready to link to it.) X-Files led to other geeky loves, such as Harry Potter and Doctor Who, which I still maintain today.

I’m in my thirties now, a legitimate grownup, and fangirling isn’t something from my past. A few things have changed, though, since my youth.

So has it all been for naught? A lark, a time-wasting hobby? I don’t think so. I’ve thought a lot about what purpose fangirling has served for me along the way. Primarily, it was a way for me to explore my feelings about relationships. Each of my youthful obsessions was based around some kind of ‘ship. Fangirling gave me a safe space to think about love, romance, and sex as they pertained to the characters… and, ultimately, to me. As a writer, I think I became better at creating characters because of my obsessions. I have always been drawn to pairings where the characters are equals, and especially where they don’t like each other right away. Unsurprisingly, that’s now my favorite kind of romance to write. I owe at least some of it to my fangirling past.

I hope I never lose the youthful exuberance of obsessions. For years, I worried about how geeky I was. Now, I embrace it. I’m geeky. I’m into stuff. And I hope that never changes.

What about you, readers? Did you, too, have obsessions? What were they? How have they influenced you?

2 thoughts on “Fangirling: Why I always have and always will”