Skip to content
Posted on August 22, 2013Author Elia Winters 12 Comments on Fanfiction: The Controversy And The Love Story 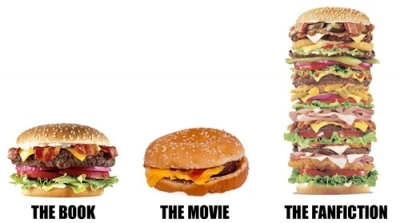 Few topics inspire such hot debate among writers as fanfiction. If you don’t know, fanfiction is the practice of writing stories starring characters from other media: television shows, movies, comic books, novels, etc. As a fanfiction reader (and erstwhile writer), I wanted to blog about this topic and explore both its controversies and its appeal.

Fanfiction inspires several controversies from different factions. First, there’s the whole copyright issue. These aren’t your characters, so how can you get away with writing about them? Well, generally, fanfiction is posted for free online and no one makes any profit from it. Almost all pieces of fanfiction are accompanied by disclaimers: “Not mine,” “no profit is being made,” etc. Authors and creators vary in their responses to fanfiction: some enjoy that it exists, and some despise it. Occasionally they put out “cease and desist” letters, requesting takedowns… but these reactions are the exceptions, not the rule.

Another area of the controversy comes when authors of popular fanfiction works change those works in either major or minor ways, then publish them for profit. It’s no secret that E.L James’s 50 Shades Of Grey began as a Twilight fanfiction piece called Master Of The Universe – which disappointingly has nothing to do with He-Man. Cassandra Clare’s The Mortal Instruments is said to bear many resemblances to her Harry Potter fanfiction The Draco Trilogy, which I haven’t read and can neither confirm nor deny, but the accusations are running rife online. So at what point does a fanfiction become original? That line, the point where a derivative work is considered no longer derivative, is hotly debated.

Aja Romano wrote a beautiful, passionate, articulate blog post defending fanfiction, and rather than rehash those ideas, I’m just going to recommend you go read the post. (Seriously, go read it. It’s brilliant.) Instead, I want to speak about my own personal love affair with fanfiction, and why I will always hold a special place in my heart for the “derivative.”

I first started writing fanfiction before it had a name. These were the “golden” pre-internet days, when if you had an obsession, you pretty much were on your own about it unless you were lucky enough to have friends with the same obsessions. Alone with my confused adolescent hormones, I began writing Han and Leia fanfiction. At first, they were short hand-written scenes, painfully mawkish, sweet enough to be saccharine, mixed in with a healthy dose of cliché. Writing them, though, was immensely satisfying. I could explore all the feelings I didn’t understand through these characters I’d grown to love. As time progressed, my scenes became longer, stretching to 10 or 15 pages, often with plot, but more often with sex. The sex was terribly written, at first. I hadn’t read enough (or experienced enough!) to know what I was doing, and I was shy around terminology and specifics. Then, I became bolder, more talented, and my stories became… okay, they still weren’t great. But I enjoyed writing them!

I kept all these stories tri-folded like letters, each one labeled as if it were homework: “Math Set 98,” “Biology Set 105,” etc. Each subject had its own theme and characters, finally culminating in Chemistry sets, where I began exploring the kinky side of sex with Ms. Blake Corothers and Patrick I-Forget-His-Name, who eventually became the stars in my first romance novel. (Not Purely Professional.) I still wrote fanfiction, but I also wrote about my own characters.

My “sets” gained a significant following among my friends. The collection with its green rubber band (the shredded remnants of which are visible in the picture above) went around through my entire social circle, a naughty secret in my Catholic high school.

With the internet came a whole new world. I first discovered X-Files fanfiction when I was in college, completely floored that these stories I’d written had a name and I wasn’t alone in writing them. I spent hours reading the best Mulder/Scully smut on The Gossamer Project. I wrote my own, just one piece, which is archived on the internet under a pseudonym. (I’m not telling – and for good reason, too. It’s decidedly mediocre.)

In the intervening years, I’ve read a lot of fanfiction, going through periods of time where I’ll blow through entire archives of a particular show. I’ve also recently discovered Podfics, delightful audiobook-style fanfics read by talented voices, and they’ve been keeping me company on my long commute to work.

Because they serve different purposes. Sometimes I don’t want to invest in character development; I want to spend time with characters I already know. The ‘net is full of excellent fanfiction authors, authors who can capture character mannerisms and actions to the degree that I can forget it’s not canon. When I find those authors, I read the hell out of them. And if their work is published somewhere? I go and buy it.

Fanfiction isn’t a replacement for other types of reading. It’s a comfortable place where I can slip off my metaphorical shoes and spend time with familiar faces in familiar worlds. If it weren’t for fanfiction, I might never have developed the courage to start writing sex scenes, and who knows where I’d be now?

I do have my preferences, and I definitely have my limits. I don’t read “RPF,” or “Real People Fanfiction,” where authors write about the actors rather than their characters. For me, that crosses a line of personal privacy that makes me uncomfortable; it’s like people assuming I have a dungeon in my basement because I write BDSM. (Do I? Don’t I? That’s beside the point.) But regular fanfiction? If I like the characters, and I like the author, I’m sure as hell going to read the story. And if people want to judge me for that, well, I’ve certainly been judged for a lot less.

So how about you, readers? Do you read or write fanfiction? Leave me a comment!

12 thoughts on “Fanfiction: The Controversy And The Love Story”