I get a lot of positive feedback from friends and family about my willingness to step outside of my comfort zone in most aspects of my life. I’ve been told I’m brave on many occasions, which is always a weird compliment to get, since I’m not a soldier or a police officer or an activist. Also, sometimes I’m being called brave for things that should not be seen as brave, like wearing a two-piece bathing suit even though I’m fat. That’s only brave if you think my body is an obstacle to be overcome. I’m continuously doing stuff that scares me, though, and a lot of that stuff is generally beyond the comfort zones of those who are complimenting me. I want to talk on the blog today about Doing Scary Things.

I was not a brave kid. Headstrong, self-righteous, occasionally obnoxious, these were adjectives more accurate to childhood me than “brave” would be. I had no natural abilities in sports and didn’t play any, so even though I was really active, I had a persistent sense that I was incapable of team sports. This means I generally didn’t try, mostly for fear of failing, and elementary school gym class was a hellish landscape of dodgeball and other sports that made no sense. I was a smart kid, and I was convinced that intelligence was the only thing I had to bring to the table. I was also afraid that if I failed at something that required intelligence, it meant I wasn’t smart at all.

I don’t know what shifted my thinking from fixed mindset to growth mindset. I think it was a process over time, but it definitely came in part from my expanding sense of self: I realized I was more than my intelligence, and so if I wasn’t good at something at first, it didn’t mean my entire self-worth was under question. Reaching that point was incredibly freeing. It gave me the liberty to try new things.

From New to Scary

Doing new things isn’t the same as doing scary things, though, and this blog post is supposed to be about scary things. There’s a pretty famous Eleanor Roosevelt quote that advises you to do one thing every day that scares you. I know it seems trite, but that quote has always stuck with me, and it’s a mantra I return to fairly often. Being advised to do scary things by someone much wiser than I, someone like Eleanor Roosevelt, is certainly inspiring. But mainly, the reason I do scary things is because I hate being controlled by fear.

Fear is a paralyzing emotion. There are so many times when I’ve avoided something out of fear, and afterward, I’m always disappointed in myself. I don’t put this in past tense because it still happens; fear still stops me from moving forward sometimes. But it happens far less often than it used to. I’ve become decently addicted to the satisfaction that comes from being afraid and then doing the thing anyway. Knowing that I was afraid, and then I pushed forward despite the fear, that’s a very satisfying feeling. That satisfaction is generally stronger than whatever fear I may be feeling. I want to feel proud of myself.

I’ve done a number of scary things, and while they may not be scary to you, they were scary to me. Every year, I participate in GISHWHES, the Greatest Int 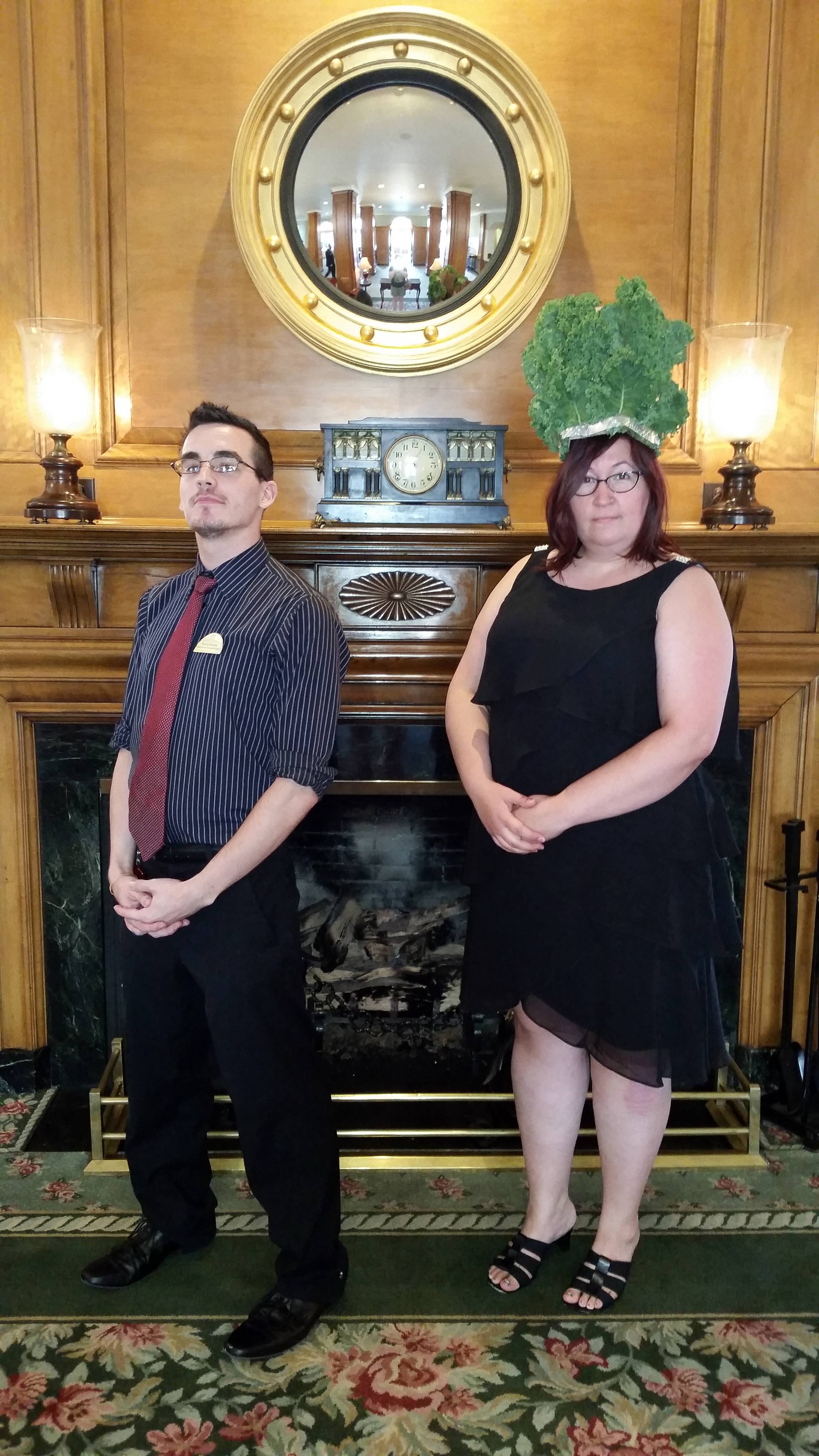 ernational Scavenger Hunt the World Has Ever Seen. I’ve written about GISHWHES on past blog posts. Gishwhes requires me to make a lot of very strange phone calls. For Gishwhes, I’ve called particle accelerators and asked for a tour. In my search for homing pigeons to deliver a message to me, I contacted a representative of the American Racing Pigeon Union, which is apparently a thing. I called a junkyard and asked if they’d let me spray paint a car and spin it around on its roof. I asked a Dunkin Donuts if they would let me go through their drive-thru in an invisible car. I posed with a hotel bellhop dressed in my finest gown with a headdress made of kale.

All of these requests, for the record, eventually got me a “yes.” I had to call three particle accelerators before one would let me tour, but aside from that, everyone else gave me a yes on the very first try. I’ve also dressed up like the Titanic, my best friend the iceberg, and posed in a public swimming pool. 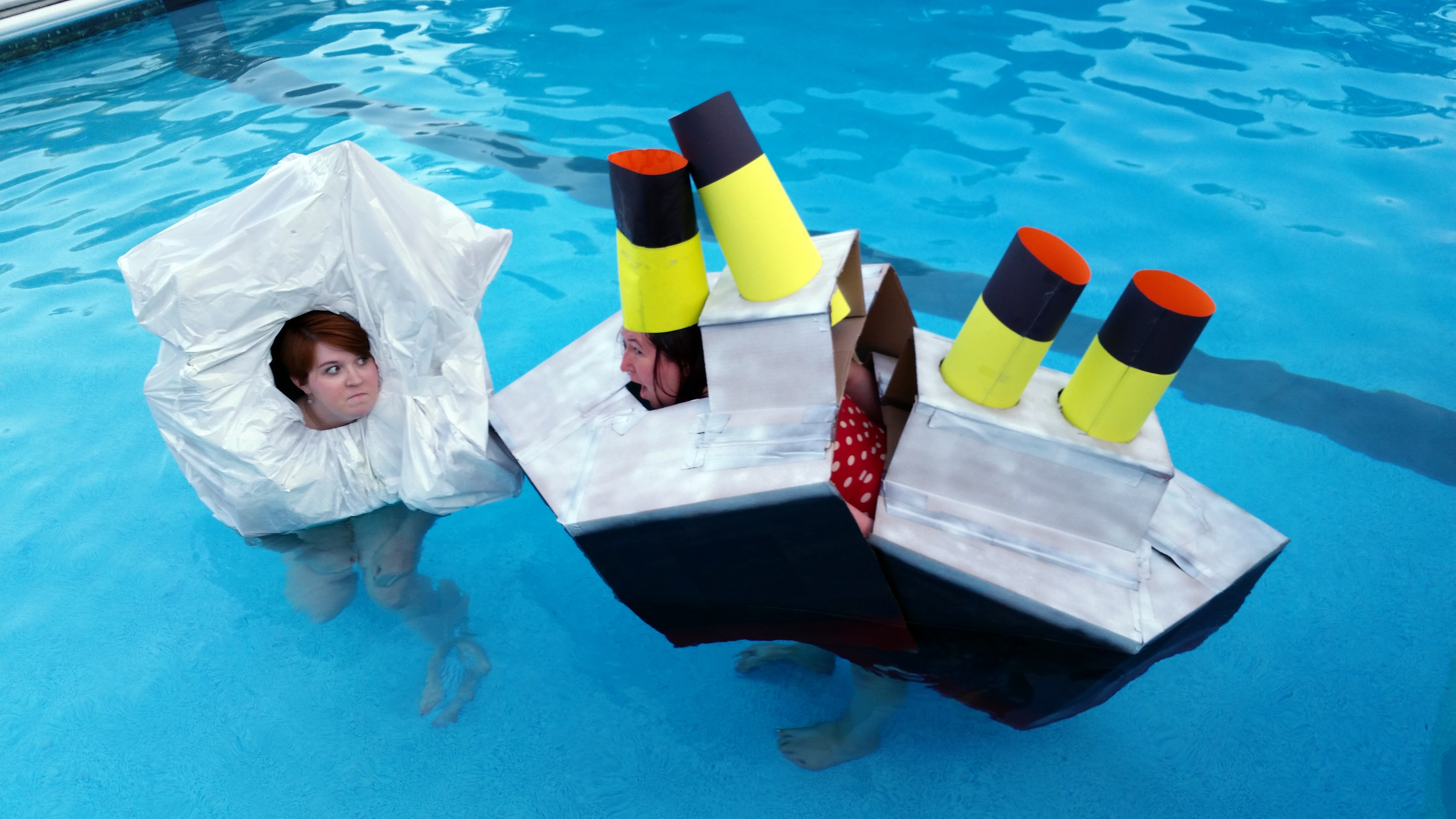 Two years ago, I took a paragliding lesson for Gishwhes, which was fucking terrifying. I feel like after I’ve done these various tasks, most other challenging tasks are a little less scary.

I’ve done other scary things, though, besides Gishwhes stuff. I’ve gotten pierced. A few times, in a few very sensitive places. I also have two tattoos, one of which is a giant shoulder piece that took an entire day. I’m not saying you have to get tattoos and piercings to be courageous, but there are a number of people who have always wanted one – or more – and avoid getting them because of fear. I’ve cut all my hair off and dyed it weird colors, too, even though I wasn’t sure if I’d like the results.

Not everyone’s scary looks the same. What may be easy for one person is another’s panic zone. I’m still nervous about taking on challenging hikes with groups for fear of letting the group down, or pretty much any group sport, ever. I can do physical activity on my own, but teams are terrifying. I have sung with groups and in a duet but I have yet to get the courage to sing karaoke. Making phone calls is scary for pretty much everyone, I think. If you have anxiety, it might be scary to go to the grocery store or look at your bank balance or even, on bad days, to get out of bed.

The reason I’m posting this today is that some people I love struggle with depression. Deep in its throes, they can’t always see a way out. For them, the Scary Thing might just be to get up, to keep trying, to dare to hope that things will get better.

I want things to get better for them. I want them to do the Scary Thing that is keeping on, every day, even when it feels impossible.

I want them to know I love them.

You don’t know what battle a person is fighting just by looking at them. As you head out into the world, imagine that everyone you meet is facing something that scares them… because we all are, aren’t we? There’s fear to be faced every day. Some days it’s big and some days it’s small. Maybe today, it’s hard enough to just get up and shower and eat a meal, and that’s okay.

Be proud of the small things you do as well as the big things. Some days, small is big.

One thought on “Doing Scary Things”