Skip to content
Posted on October 25, 2012Author Elia Winters No Comments on A Guide to Winning NaNoWriMo – Part 1: General Tips 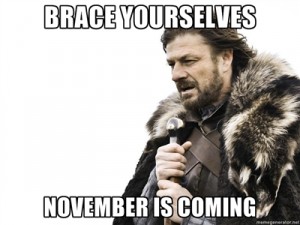 It’s almost November, and around here, November means National Novel Writing Month. The month hasn’t snuck up on me this time; rather, it’s loomed slowly out of the shadows like a great hulking beast, and I’ve watched it come with what may seem, to others, like an inappropriate lack of fear. We’re exactly one week out from launch day, and forums and blogs alike are littered with anxiety-filled pre-nano posts.

You don’t need to have this much anxiety. A healthy dose is all right: you’re attempting a new challenge! Challenges are challenging! But if you’re beginning to break out in cold sweats, or the apprehension is becoming fear, I hope these next few posts can help.

Before we begin, though, figure out if you really want to win. This seems silly, right? Of course you want to win… or do you? Have you already decided it’s not possible? Have you found yourself saying, “Well, it’s all right if I don’t win, because I’ll still have written more than ever before…” or “I probably won’t win,” and meaning it? Are you saying these things because you really feel that way, or because the thought of “failure” is crippling?

It’s okay to not “win.” It’s okay to not even want to win, but just to enjoy participating. You will have written more than ever before. No one will think less of you for the attempt.

It’s also okay to really, really want to win, and throw your clichéd hat over the wall in the attempt.

This post is written to those of you who really want to win. The rest can hopefully glean some important tidbits in here as well, but if you find there’s an inordinate amount of focus on winning, it’s because that’s how I roll, yo.

So, without further ado, here is a compiled list of Nano wisdom, gleaned from 11 years of participation and winning. I’ll be putting these out over the next few days.

That’s all for now. Next time: planning tips! I’ll try to get them out with a few days’ notice, so they’re actually…  useful. (No, you don’t need a month to plan. You can do it in just a few days, really.)