A week ago, I got back from the Romantic Times Booklovers Convention in New Orleans, Louisiana. Someone (anyone know who?) described RT as “Comic Con for Romance Novelists,” and that’s the most accurate description I’ve ever heard. Like Comic-Con, RT was filled with people in costume, stuff to buy, tons of swag, a convivial atmosphere, and seemingly endless lines. This was my first RT, but I’m no stranger to conventions, so I was better prepared than other RT virgins. Nonetheless, the experience was overwhelming… and glorious. It also contained several very surreal moments. In this post I cover the following:

So let’s recap, shall we?

I’ll come clean right away: I was at RT primarily to meet people. Workshops were great, but I wanted to network and put faces to names. As a result, I attended fewer panels and more socials, a decision I’m ultimately happy with. One panel I definitely enjoyed was The Author-Blogger Partnership, a panel moderated by Amanda Carlson that included Dana Alma of Readaholics Anonymous, Angela Carr of Under the Covers, Darynda Jones, Chelsea Mueller of Vampire Book Club, and Kristen Painter. They really honed in on aspects of the author/blogger digital partnership, as well as tips for building a stronger digital fanbase.

Surreal moment #1: During that panel, I was taking notes on my iPad on one knee and following the #RT14 Twitterstream on my phone on my other knee, and saw this tweet pop up from E.L James (yes, that E.L. James): 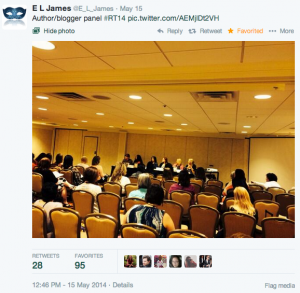 Yeah, that’s my back right there in the middle of the bottom of the pic. So I turned around and… there’s E.L. James, just a few rows behind me. It’s pretty strange to see your own back in someone else’s picture when you aren’t expecting it, but my hair looks hella cute from the back, doesn’t it?

Over the course of the Con, I also attended a few socials (including a fabulous Steampunk Tea) and a pretty awesome workshop in burlesque. That workshop was taught by a professional burlesque dancer who was gorgeous, funny, and super inclusive. People took pictures during that workshop, and they ended up on Twitter, but I’m invoking the Vegas Rule and not posting them here. There were inappropriate actions performed on feather boas and that’s all I’m saying.

I also attended two of the evening parties. The first was the amazing Samhain Saints n’ Sinners party, for which I rocked out my cute devil horns and danced the night away. Here I am with the wonderful Saritza Hernandez, my agent, both of us looking particularly fabulous. 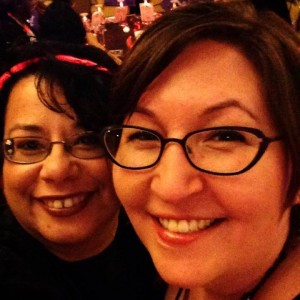 I also attended Heather Graham’s Mardi Gras party, but left kind of early because I was exhausted and there’s never enough sleep at a Con. Regardless, there were a few gems. First off, this picture of Jennifer Kasey’s pin: 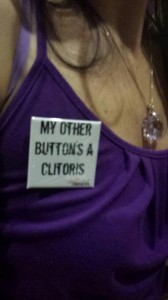 Apparently the woman who was giving these away (and WHO WAS IT? MY PIC IS TOO BLURRY) only had a couple of dozen, and I’m so sorry I missed them because that pin is amazing.

Another great moment was when my mask was stolen for this pic: 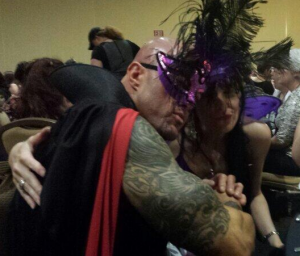 I think he pulls it off even better than I did.

I intended on attending Harlequin’s party on Saturday night, but by then, I was completely wiped out and no good to anyone, so I stayed in the hotel room and spent two hours sorting all my swag before collapsing into a coma.

I mentioned something about elevators? RT makes use of all available advertising space. As such, the elevators were all filled with book covers. Sometimes, manchest blown up to five times its normal size was terrifying rather than tantalizing. I got intimately familiar with the belly buttons of several cover models.

This guy had the creepiest belly button I’ve ever seen – sorry, dude; you’re hot, but it’s true – and I heard it compared to both the Eye of Sauron and a facehugger from Alien. You decide. Zoom right in there, I dare you. Now imagine that thing three inches across and right next to your face. 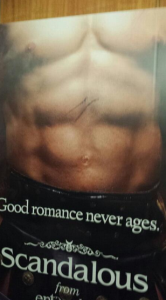 I really believe that the Con happens between events. Whether in line having crazy conversations with strangers or finally coming face-to-face with a mutual Twitter follow, the highlight of my RT was definitely the people I met. I absolutely loved hanging out with everyone, even if the amount of socialization occasionally got overwhelming.

I got to meet many of the people I know from the Twitterverse: Clovia Shaw was a hoot at the Giant Book Fair. I ate beignets with Jane Kindred. Laurie K and Renae Jones rocked Bourbon House with me for some great food (and a lot of back-and-forth Tweeting). Kerri Buckley, the amazing woman who edited Purely Professional, sat down with me for drinks in the hotel bar and brought along the hilarious Lynda Ryba and so-sweet-it-should-be-illegal Heather Goldberg. I knew we were in trouble when we started talking about Bronies.

I monopolized Saritza Hernandez’s time as much as she’d let me, stealing her away for two (two!) dinners and some lobby conversation. She introduced me to many of her other clients whom I’d only met on the interwebs, among them Heidi Cullinan and Damon Suede, and the woman who brings me to Surreal Moment #2.

Surreal Moment #2: Saritza introduced me to Kate McMurray, another of her clients, but when we looked at each other, we realized no introductions were necessary. It turns out that Kate and I went to college together at UMass Amherst and knew each other through many of our English classes. How surreal that we both have the same agent – based out of Florida – and we meet up for the first time in a dozen years in New Orleans. 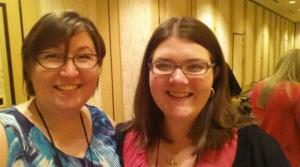 Also, Sarah from Smart Bitches, Trashy Books (which if you’re not reading, you should be) complimented my dress and I restrained my inner fangirl long enough to thank her like a dignified human being rather than melting into a mushy pile of goo. You’re welcome, Sarah.

I also had a great airport food court conversation with Natalie from Bibliojunkies to squeeze in one last gem from an incredible experience.

The RT Giant Book Fair has been getting a lot of press lately over how well the entire endeavor may or may not have been handled. Everyone is weighing in. You can read some various perspectives from Kendall Grey, Hugh Howey (whose article seems to have sparked much of the discussion), Courtney Milan, and Smart Bitches. I’m going to keep my comments short and sweet:

I do wish we’d have been grouped by genre, not alphabetically. It’s only by pure chance that I wasn’t seated next to some Inspirational Christian Romance author whose readers would probably have been put off by my (fucking gorgeous) cover poster. I would have felt bad for everyone involved, but fortunately, that didn’t happen to me. Maybe to someone else.

Anyway, the Harlequin bigwigs came by my table to say hello, making me feel uber special, and Heather took this picture of me looking all cute at my table. 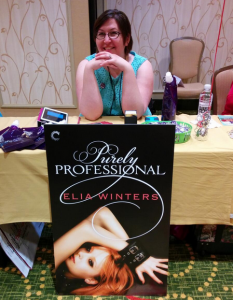 All in all, it was a crazy event, but I’d probably do it again. Maybe with a full bottle of wine instead of water.

Special Note: I’m on Autography now. You can get a digitally autographed copy of Purely Professional! Just email me at eliajwinters at gmail.com and let me know you’d like one. You’ll receive an email with a link to buy the autographed book. I’ll keep this promotion up until June 30th unless I get overwhelmed by email first.

I created this meme to set the stage. 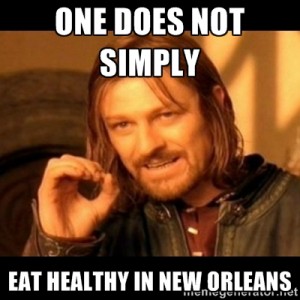 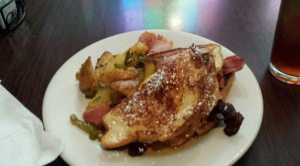 As a non-seafood eater, I was relegated to chicken much of the time, so I wasn’t especially excited about this roast chicken with jambalaya risotto. Then it arrived, and … well, see for yourself. 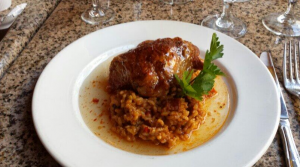 Seriously. Angels sang and the baby Jesus wept. It was wonderful. I paired it with a tiny bourbon milk punch, which is apparently A Thing in New Orleans. My picture makes it look ginormous, but I swear it was only a couple of ounces. 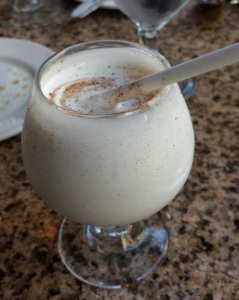 It looks like I’m drinking a whole fish bowl, for crying out loud. That’s a TINY plate in the background, not a full-sized dinner plate.

Everyone was raving about this place despite the long lines, so I gave it a whirl. Turns out that when you eat lunch alone, you can often skip the whole line and eat at the bar. Who knew?

Their special was Eggs Cochon, essentially a pulled pork eggs Benedict, so I ordered it. I accidentally ate half before remembering to take a picture. 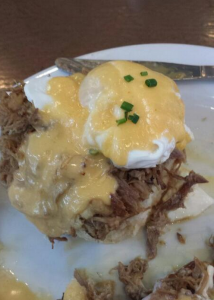 It was amazing. I made indecent noises while eating it. I paired it with a “double mimosa,” which turned out to be a whole freaking glass of champagne with a tiny splash of orange juice and grenadine. Thank goodness NOLA allows open containers, because I had to take half that sucker to go lest I be drunk off my ass at noon.

Cafe Du Monde serves one food item: beignets. They serve a dozen drinks to go with your beignets, but if you go there, you’re getting beignets. It’s all right, because the beignets are sweet sugary fried pillows of angel hugs and sunshine. I paired mine with a big glass o’ milk. 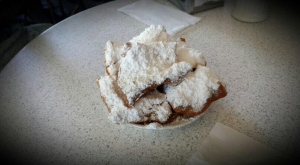 After the craziness of the Giant Book Fair, I wanted a burger. I asked the concierge for “the best burger I could walk to,” and she sent me to the Clover Grill, a tiny greasy spoon at the far end of Bourbon Street. The mile walk was endlessly worth it, because my burger was amazing. This was my most popular tweet of my whole trip. 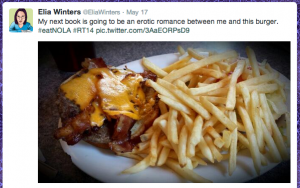 Well, I suppose that’s the gist of it. There’s more, always more, but if you want the whole experience, you’ve just got to go. So, will I see you next year in Dallas?