There is a new exciting toy on the market, and everybody’s all a-rumble for it: The Wand from We-Vibe. Most people with any awareness of sex toys have heard of the Hitachi Magic Wand, even if they don’t necessarily own one, and many other wands have come along with the attempt to replicate the Hitachi’s clit-buzzing jet power. We-Vibe’s Wand is quite a bit different, but different doesn’t always mean bad. In this case, I think different can be pretty damn good. Here’s my complete We-Vibe Wand review.

It’s hard to get a sense of scale with this photo, but imagine that it’s about the size of your entire forearm.

The first thing I noticed was that I couldn’t get the box open.

I wish I were kidding about this, but this giant box is the kind where you slide the whole lid up and off, and the tiny little finger notches in the side make it impossible to get any good grip to overcome the suction of the box itself. Honestly, I was laughing myself into near tears over the nearly five minutes it took to get this box open. I did eventually manage it. (When my friend came over later that day, I immediately said to her, “Try to open this box!!” I could see this becoming a new form of hazing.)

Inside the box is the Wand, and it’s gorgeous, I’m not gonna lie.

The Wand comes with a charging cable (yup, it’s rechargeable) along with two silicone accessories for the head.

Here are some shots of the Wand from various angles so you can get a better sense of what it looks like in hand.

That gives an idea of its scale.

The Wand has a power button, a pattern button, and a raised up/down switch to vary intensity. Rather than clicking through individual levels, you can hold the switch up or down to gradually change the intensity, like a joystick. (Heh. Joystick.) The up/down switch works for all patterns, too.

The Wand is rechargeable and fully waterproof. It charges through magnetic induction via this tiny cable that seems like it cannot be powerful enough to charge a mammoth beast…and yet it is!

The head of the Wand has a curved indent in its side that’s where the attachments “lock” into place.

Both of the attachments it came with have this raised groove so they can fit into one spot on the We-Vibe head and presumably stay in place.

Here is the stroker attachment, mostly designed for penises:

And then the other one is a “flutter” attachment, which has little flexible silicone fins all the way around.

I swear, when I look at this, I think of somebody wearing one of those weird sun-visor things that were Very Popular when I was growing up in the late 80s in Florida.

So that’s a lot of stuff all in one box! Providing you can get the box open, I mean.

But what we really care about is performance, yes? Yes.

First off, I need to offer a disclaimer.

I don’t love wand-style vibrators. My clit responds best to specific, pinpoint stimulation. Too much broad vibration diffuses all throughout my bits and doesn’t exactly hit where I need it to hit. I have a couple of wand vibes that I’ve tested, or bought for myself, and they’re never my go-to toys. So I’m going to assess this wand, and even in the ways in which it doesn’t work for me, I’m going to try to separate out the ways in which that’s my body instead of the toy itself.

Now, back to your regularly scheduled review

The We-Vibe Wand has a deep, lovely, rumbly motor. Immediately, that separates it from the Hitachi for me, which I find incredibly buzzy in ways that make me itchy and uncomfortable after use. Like most of the We-Vibe toys I’ve tried, the Wand has deep, penetrating vibrations that feel really nice.

Because the head is so broad, I had to crank up the intensity of the vibration a lot more than I normally would. I tend to use toys on a fairly low setting. For the Wand, I was bumping it up…well, I can’t really tell how high, because it’s a variable intensity. But higher than I think I normally would. Nowhere near high, though. (It’s fine if you like your vibes on high, by the way. I’m just recounting my experience.)

I had a hard time getting the Wand lined up exactly how I wanted it for a while. Did I want to press the top of the head against my clit? If I did that, the body of the toy was down between my legs, and it was really hard to reach the handle. The side of the head seemed the best option, and what the toy was designed for, but I wanted a bit more of a ridge to work with than the smoothness of the toy head itself. Once I figured out a good angle, I was all set.

I tried both of the accessories for the Wand, and didn’t really like either of them. The stroker is more clearly designed for a penis, and didn’t quite work for getting stimulation to my bits. The frilly fan one seemed like a better option, but the fins weren’t firm enough to give me specific pinpoint (or even more directional) stimulation, and I find that they just sort of…tickled a bit. I want an attachment with more directional focus to feel like I’m getting the best out of the Wand for my body.

But what about the power?

If you use a wand-style vibe NOT on high, though, I think you’d probably find a setting on this that you really like.

We-Vibe has their WeConnect app for controlling many of their toys, including this one. This seems the toy least useful to control with an app, in my opinion, unless you’re using it for long distance play. With long-distance play, you can give control to a partner who then controls your toy through their phone. That’s fun, yes, but you’re not wearing a tiny toy in your underwear, here. You’re holding a baseball bat waiting for it to turn on and off. So, I wanted to mention the app, but I found using the app far clunkier for the Wand then just reaching for the easy-to-find buttons.

I had to google how to turn off smart silence, which brought me to Betty Butch’s review of the Wand. Thanks for letting me know, Betty, to hold down the patterns button for a few seconds to turn off this feature. (You can also do it in the app, but I wasn’t using the app at the time.) The feature itself is coming from a good place, but it isn’t for me.

Cheers for a wand vibe that’s rumbly instead of buzzy. The penetrating vibrations are lovely and don’t leave me itchy.

Caveat: As I mentioned before, while the Wand is powerful, it may not be powerful enough for those who need their vibrations on the highest setting.

Cheers for waterproofing. Why aren’t all toys waterproof? I may not always want to wank in the shower, but I want the option. The Wand gives me that option.

Caveat: that box is way too hard to open. You put tiny little notches in the side like I’m going to be able to grip that box tight enough with my thumb and forefinger, hand spread all the way open? I don’t know how to fix this, but the box is pretty much the first thing I got rid of. I’m never going to store this toy in that box.

Cheers for a beautiful aesthetic: purple, silicone, feels nice in hand, with those lighter purple accents and the teal accessories.

Caveat: those accessories didn’t do much for me, and I’m not sure they’ll do much for you. But cheers for having a way to lock them into place with the curved notch so they don’t slide everywhere during use.

Cheers for the idea of Smart Silence, even if I don’t particularly like it. This accompanies my cheers for the WeConnect app. Again, it’s about options.

Cheers for a rechargeable wand that I don’t have to plug in every time I use.

Cheers for variable speed by an intuitive switch that’s easy to find even when you aren’t looking. That said, I couldn’t remember which side was up and which was down because I kept angling the toy different ways. Still, it was easy enough to figure out by pushing it.

Cheers for putting the pattern button separate from the intensity button, but letting the intensities work for all the patterns. I’ve commented on this in other toys, and I’m pleased to see it getting more popular.

I really like the We-Vibe Wand, even if it’s not a style of toy that works best for my body. It’s a high-quality product that’s thoughtfully designed, aesthetically pleasing, and built with a myriad of functions. This is a perfect vibrator for someone who’s intimidated by vibrators, as long as they won’t be freaked out by the fact that it’s the size of your arm. It’s pretty, it’s effective, it doubles as a back massager, and it doesn’t look like a penis. If you’re into Wand vibes, you should get this one. If you’ve never tried one…well, you should still get this one.

Special note: get 5% off We-Vibe right now by using the code VIPLIST at checkout!

I received this toy in exchange for my honest review. Affiliate links are being used in this post, and buying a product through them benefits this blog. 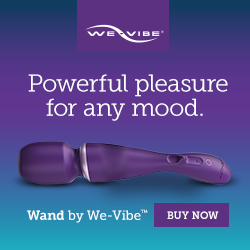 One thought on “New Magic: The We-Vibe Wand Review”